Last weekend I went to a community yard sale in the neighborhood one of my best friends lived in when were were in high school and college. I met up with a couple buddies and my friend's parents house and we walked around. It wasn't a real great sale... mostly house hold junk, but there was one person selling some Toy Biz X-Men figures. Check out my haul in the video below.

As a kid growing up in a blue color house I always enjoyed the show Rosanne. The family on the show was way crazier and more dysfunctional than my own, but I for some reason related to the show. The Mom taking care of the kid while the Dad was out working with his hands or hiding in the garage. My own Mother despised the show because she never liked Rosanne's crude humor and would probably bring up the time Rosanne screamed the National Anthem if I were to mention the comedian to her today. 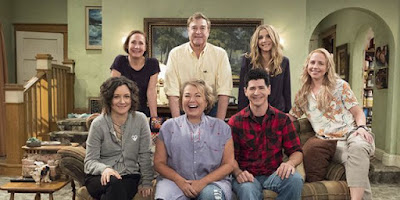 I always enjoyed the cast, especially the Dad. I don't know if it was his role on Rosanne or his early 90's films (Matinee, King Ralph, The Babe) that made him one of my favorite actors, but I love John Goodman. As I got older John Goodman kept popping up in movies I loved, especially the Cohen Brother's films.

I watched the original run very faithfully through season seven. At that point I was in middle school and I guess distracted by other shows and had other things to do. I'm kind of glad I missed out on a lot of the crazy stuff when the show "jumped the shark" at the end.

When ABC announced the show was coming back with the original cast and they were retconning some stuff from the end of the series I was very excited. I've watch the recent season and really enjoyed it. Just as I have enjoyed re-watching old seasons over the years. Unfortunately when I got home from work today and jumped online I found out the 2nd season of the relaunch has been canceled due to racist tweets sent by Rosanne. Proving my Mom right once again that Rosanne is crude and not funny. I'll miss the new version of the show and I wish the cast and crew good luck with the next step in their careers. I know John Goodman will land on his feet, but many of the other actors are far less marketable and a steady gig was great for them.

It is interesting that we live in a world were you can publish your thoughts to millions of people with a couple clicks... and sometimes there are consequences for what you say.

Posted by Buzz Chuck at 6:30 PM No comments:

My Flea Market friend Naz asked me to show off my pick ups in his Flea Market Adventure video. The video clip should start right were I come into the video, but make sure you check out everybody else's pick ups as well. I even made the thumbnail.

Super Friends Superman from the DC Multiverse line by Mattel. This Superman mold has been released a couple times now. A great looking action figure with a cloth cape. He makes me think of the Kenner Super Powers lines, but his package specifically mentions the Super Friends cartoon.

Posted by Buzz Chuck at 9:48 PM No comments:

Posted by Buzz Chuck at 5:10 PM No comments:

Posted by Buzz Chuck at 3:28 PM No comments:

Vintage Toy Show Haul - GI Joe, Ninja Turtles, Star Wars & more. I went to a toy show in Delaware with Nick, Mike, Rose and Tony. While were were their we meet up with other friends and bought some fun toys. Check out my haul in the video below.