A buddy of mine, Paul (who is one of the Tiger Force Flunkies in Action Figure Adventures) called me from a yard sale to ask me if I wanted the GI Joe table tray for ten bucks. I told him yes and he picked it up for me. I had seen this back in the day at least once in a store, and of course on yojoe.com.

The top surface has plenty of space to eat or draw or place a laptop. It features a cool battle scene that features a number of GI Joes and their vehicles. The legs are kind of short it is clearly designed for a child. 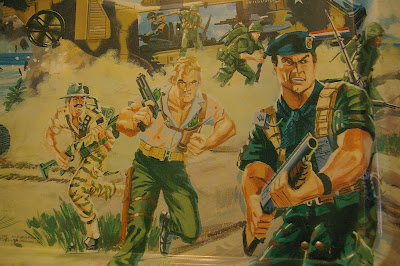 The main focal point in the artwork is Recondo, Chuckles, and Lt. Falcon. In a way it is an odd miz of characters. In 1987 when it was released Chuckles and LT. Falcon were new, but Recondo is a much older figure. All there of these characters are based directly off their packaging art. 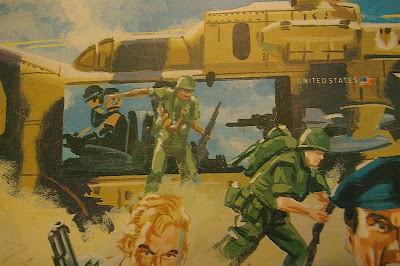 If you look carfully at the solders behind them in and out of the Tomahawk you man notice that none of them are acutal GI Joes. These "Green Shirts" are generic characters the artist created, Their apearnaces do not match or even really clostly resenble any specific GI Joe character. Other than to say that most of the original group of Joes wore green outfits and helmets. 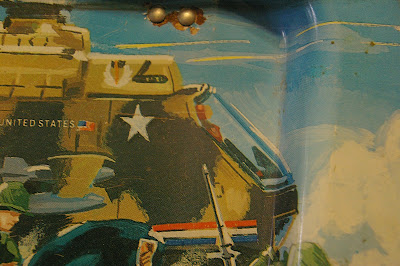 The Tomahawk Helicopter is one of my all time favorite toys. If I had to part with everything in my toys collection but one item, it be this awesome helicopter. You can just barely see the pilot, but he is based on the character designs for Lift Ticket. He has the red helmet, red shoulder pads, and dark green uniform.

Flying above the Tomahawk are the GI Joe Conquest Jet and Dragonfly Helicopter. 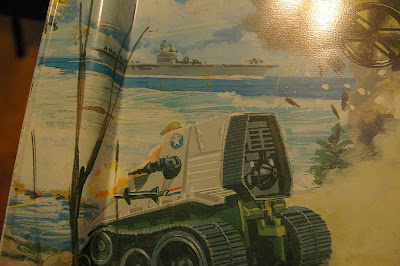 The last little piece of art that makes up the top of the tray shows off the USS Flagg Air Craft Carrier and Sgt. Slaughter's Triple T Tank. It's kind of a shame we can't really see Sarge the way the painting is composed. It is very clear that the artist was looking at the toy of the tank. Notice the clunky hitch that most GI Joe land vehicle have as well as the white tabs sticking thought the black engine cover at the back of the tank.
Posted by Buzz Chuck at 4:45 PM