As part of a line of Super Hero themes cars in 1979 Corgi released the Shazam! Thunderbolt. This yellow low rider racer features lighting bolt decals, a miniature Captain Marvel at the wheel, and his magic word on the side. I got this car from a neighbor kid who game me all his matchbox and hot wheels cars when he outgrew them. It shows it age and the fact that it's had two owners.

The decals are a little worn and there is a lot of paint wear on Captain Marvel's head. Three is a small silver lighting bolt on each side of the cockpit, and both of them are also snapped off. As a kid I hard a hard time understanding the whole Shazam! / Captain Marvel thing. It wasn't until i got older that I figured out that Shazam! is the magic word to turn Billy into Captain Marvel and not his name. What a dumb copyright issue anyway. 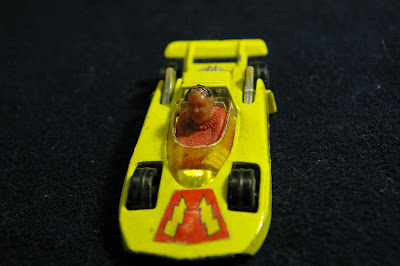