In the early '90 I was moslty playing with TMNT and GI Joes. I was pretty focused on only a couple of current toy lines, plus picking up vintage Star Wars figures at yard sales. My buddy Derek was always  finding the craziest new toys that I had never seen before. Things like Monsters in My Pocket and Attack of the Killer Tomatoes. One year for Christmas his folks gave me two Killer Tomato figures. Each pack came with a monstrous Tomato and a PVC figure for them to eat. The little PVC people were the human characters from the Killer Tomato cartoon show. I never saw the cartoon, so based on the commercials for the line, I think Dr. Gangreen is the mad scientist who created the Killer Tomatoes. 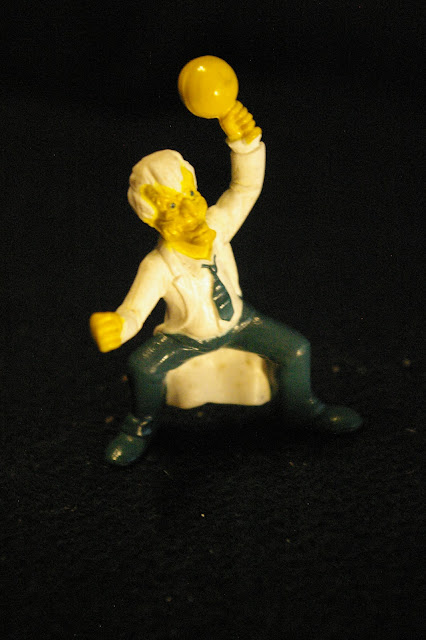 He is from the Dr. Gangreen Vs. Ketchuck set. Ketchuck looked like the dumb tomato of the bunch. He has that dopey cartoon look to him. So this little guy can't do much, he has no articulation and not really very good paint apps. I'm not sure what happened to the other toys I had from this line.