This figure was released on a card back that called him Green Ghost. At the beginning of the toy line the Real Ghostbusters show was being developed based on the Ghostbusters movie. This guy was not given a name in the movie, and his name came about during the development of the show. Most people know him as Slimer even though he was not packaged that way. He was much meaner in the movie and pilot episode of the cartoon, than the actual series. 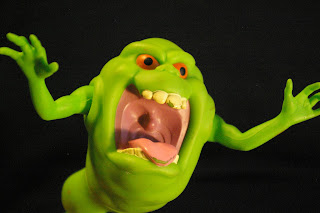 Slimer came with three pieces of food to eat, none of which I have. This ghost toy does not have feet or a base, so there is no way to stand him up. My fingers popped into the bottom photo while holding him up for the picture. 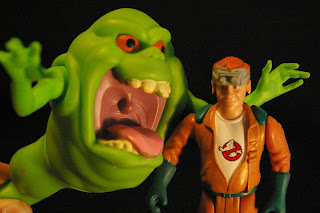 I really enjoyed the classic cartoon as a kid and had a lot of toys from the line. I never had Slimer as a kid, but picked him up at a yard sale.
Posted by Buzz Chuck at 4:58 PM