Originally I planned to work on another animated review tomorrow, but they are behind on getting set up at the Haunted Hay Ride (Sleepy Hollow - video) I work at during October and called me in tomorrow. So, I may be building some stuff or painting, not sure which yet. In honor of the hayride I decided to post about a toy I was saving for next month.

Count Orlok from Nosferatu is the original movie vampire, and for an old silent film villain he's damn creepy. My buddy Paul, who is a video game and toy dealer, gave him to me carded a couple of years ago with a few other toys he was tired of dragging to shows without a sale. 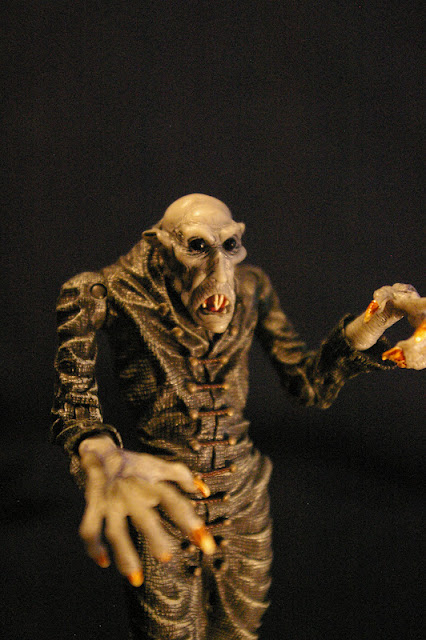 He's got a weird lanky sculpt with a creepy face. He came with a rat covered base (not pictured) and his skin changes color in sunlight. He's unfortunately a little hard to stand up. His legs are sculpted into an odd stance.
Posted by Buzz Chuck at 10:11 PM