Sy-Klone was never one of my favorite vintage He-Man characters. His head sculpt was to close to He-Man's and his action feature kind of ruined his arms. You couldn't really pose him at all because they were too floppy. I never really minded the fact that I missed getting him for the MOTUC line. Eventually he was reissued, and I decided to pick him up because I owned so many of the figures from the line. 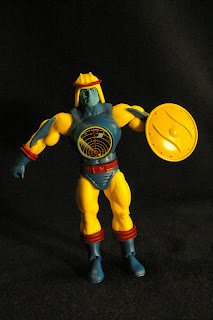 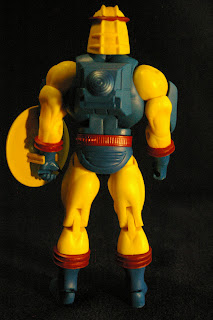 He comes with his classic yellow shield and his lenticular sticker radar dish on his chest. As an additional accessory and a nod to his 200x figure Sy-Klone comes with a giant red disc weapon that attaches to his back. 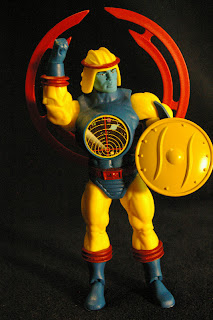 His ab-crunch joint is very odd. due to this radar dish chest, Sy-Klone can lean back farther than he can lean forward. It's almost like the joint is backwards. It is understandable why he could not bend forward. One of the most interesting parts of his sculpt include the blue fins on his arm. They are well sculpted to look like his vintage figure without interfering with his articulation. His large red disc weapon can be held in his hand or clipped to his back. 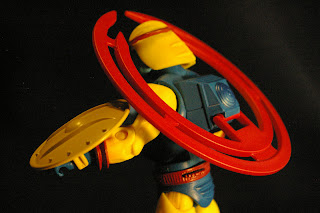 His name is so oddly spelled.  I have seen him listed in many ways online including: Sy-Klone, Cyclone, Sy-Clone, and Syclone.
Posted by Buzz Chuck at 4:36 PM