At the age of 85, Lou Scheimer passed away yesterday. Lou was the founder of Filmation Studios, an American animation studio that created many cartoons in the 70's and 80's. Some of the cartoons they produced include The Lone Ranger, Star Trek, He-Man & The Masters of the Universe, She-Ra: Princess of Power, Brave Starr, Ghostbusters (not "The Real") and dozens of others. Along with heading the studio Lou was also involved in developing the world and mythology behind the Masters of the Universe. Lou even voiced characters in many of the Filmation shows.

Along with wanting to make quality cartoons and keeping the entire process here in the United States, Lou also wanted his cartoons to have a conscience. Many Filmation cartoons ended with little morals or lessons to give kids something to take away from each episode. 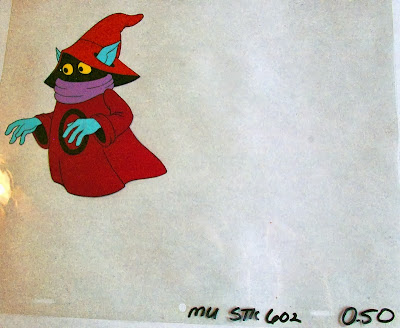 Above is an original animation cel from the He-Man cartoon show. The cel features Orko, the little comic relief side kick to He-Man. Kid friendly characters like Orko were common in each Filmation show. Orko is one of the many characters voiced by Lou Scheimer. His voice was pitch shifted somehow to create Orko's unique voice. If you look at the writing on the cel, you can see it's from Masters of the Universe (MU) and is a Stock cel (STK) meaning that it is part of a common action for a character that was pre-animated and used in several episodes.