It seems like every brand is getting in on the blind bag mini figure fad. I've bought some from a few different lines. Today my Nerd Block (a monthly grab bag of nerdy pop culture items shipped to your door)  arrived and it contained mini-figs from three different brands: Batman, Spawn, and Portal 2. The only one I really care about (the problem with Nerd Block) was the DC Universe figure. I cracked the little box open to find a crouching Catwoman inside. 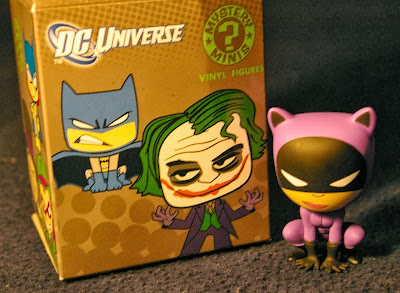 It turns out the figure I got was one of the more rare figures. This style Catwoman is packed 1 out of every 144 figures. There is one style  of Batman and one style of the Joker that are also that rare.  Crouched down the figure stands 2" tall. The body has a nice amount of sculpting, but the head is decorated entirely with paint apps. Catwoman has one point of articulation, and its a swivel at the neck. 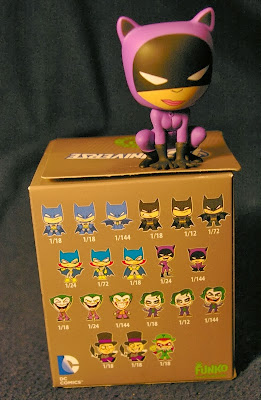 * I buy nerdy t-shirts from a site called Shirt Punch from time to time. This Nerd Block product is a spin off company, so every month the Nerd Block includes a t-shirt and several other small toys or trinkets. I've gotten Funko Pop figures, blind boxed figures, stickers,  trading cards, and other odds and ends. This is the second month for Nerd Block and myself. It sounded cool in the introductory email so I signed up right away.. It's kind of fun but also a huge waste of money. I figured it would be fun for a little while, and then I will probably cancel my subscription. A Block costs $19.99 plus shipping. It's a great value if the majority of the stuff in the block is up your alley.
Posted by Buzz Chuck at 7:09 PM