I remember buying my vintage Luke Skywalker used at a local comic shop as a kid. I was kind of excited to have him because my best buddy Derek didn't have him. Derek's Star Wars collection at a time was much larger than mine.


Like my entire childhood Star Wars collection, I did not have Luke's lightsaber. I armed him with a blue toothpick. In the end, I think that toothpick was much cooler than the actual plastic lightsaber that was included with look.


A New Hope Luke (aka Farm Boy Luke) was my go to Luke figure until I got Jedi Luke. I never got the Bespin Luke until long after I was done "playing" with my action figures. 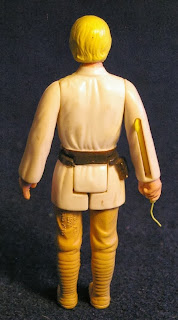 Like the rest of the A New Hope figures that where armed with lightsabers, Luke has a channel up his arm for the little plastic weapon to slide inside. I picked up Luke's actual lightsaber at a yard sale one time with a Ben Kenobi figure. Like many used samples the small tip is a little bent.