As part of the new Nickelodeon Teenage Mutant Ninja Turtles line, Playmates has released two packs of toddler turtles in training. These sets, similar to the 2000's Toddler Turtles are called Ninjas in Training. Each figure features limited articulation and some training weapons. They each have a unique skin tone that matches their teenage version.

The Turtles have articulation at the necks, waists, and shoulders. This allows for some pose-ability, but not a lot. I would have preferred that they had wrist swivels than waist swivels. Their shell's look odd if you rotate their waists. 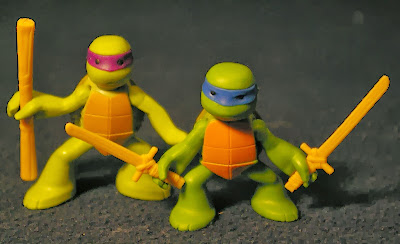 One Ninjas in Training pack includes Donny and Leo.  Donatello looks a bit puzzled, while Leonardo looks very stern. Donny can only hold his staff with one hand. His other hand is sculpted open. 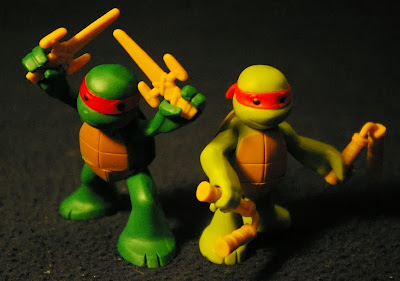 The second set includes Raph and Mikey with their training weapons. Note how Raph's weapons look like they are made of sticks taped together. Raphael looks angry, while Michelangelo has a big smile on his face.

They are very cute, and look cool with the Teen and Baby versions I already have. (The babies came with the ooze canisters)
Posted by Buzz Chuck at 6:33 PM