I have posted before about my my buddy, Derek, and I used to love to arrange all our monster toys into little scenes with props and environments. Then we would snap pictures of them with a 35mm camera back in the early 90's. We called this a "Set Up". Long before Articulated Comic Book Art or any of the other toy photography trends. We were posing and photographing our toys. This particular Set Up was a battle between several monsters on a small island out in the ocean. The white towels are the land, while the blue carpet was the water. Two Godzilla figures, Battra, Anguirus, Mothra, Mecha King Ghidorah and several Ultraman monsters are all invading the small island city. The city is made of Micro Machine play sets and Lego skyscrapers. F-X7 from Star Wars can be spotted on land in the middle of the photo. The Cobra POGO from GI Joe is serving as a missile silo with a large green missile inside from the 1982 MMS. 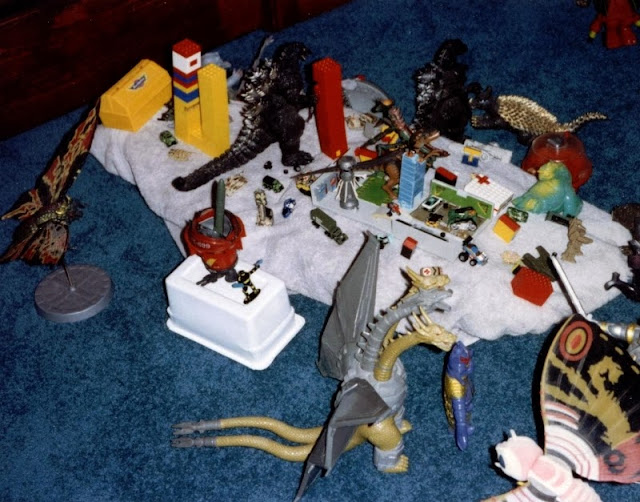