In 1995, to go along with the successful kids show Disney's Gargoyles, Burger King included Gargoyles toys in their kids meals. The only one I has was the Color Mutation Broadway, which I bought at a yard sale. In the show, stone Gargoyles would come to life at night only to be frozen as statues again when the sun rose. This toy captures that plot point perfectly. 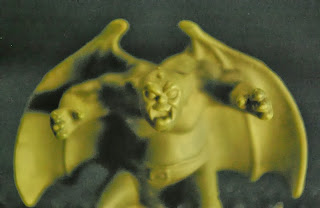 This PVC figure of the character Boardway is made of a grayish plastic that turns green when put in warm water. I used to have fun warming up his face with my thumb and watching it slowly turn to rock. I liked the cartoon show, but was a little too old to collect the toys. I picked this guy up cheap at a yard sale and mostly used him as a Gothic decoration with my Castle Lego figures.
Posted by Buzz Chuck at 5:01 PM