Time to open up three more Masters of the Universe Action Vinyl figures. These nicely sculpted and detailed figures are made by the Loyal Subjects. How did we get this time? No doubles, no doubles...

Got a box of Vintage Star Wars action figures from out of my co-workers attic. Ryan, Paul, and Kevin dig through the box to see which figures are here. Kenner Star Wars figures in this collection span all three movie toy-lines, but no Power of the Force figures here.

Posted by Buzz Chuck at 4:32 PM No comments:

Here's a fun adventure featuring the Mighty Morphin Power Rangers the Movie McDonald's Happy Meal toys. All six Rangers and their Zord battle Ivan Ooze's monsters. It was fun playing with the Power Rangers figures I picked up at a toy show not too long ago.

Posted by Buzz Chuck at 4:39 PM No comments:

Time to unbox some GI Joe Action Vinyl Blind Boxes. These are highly articulated and detailed figures from the Loyal Subjects. I've been impressed with the He-Man and Power Ranger figures they have made as well. Who will I get?

I take a look at Kanan Jarrus in Stormtrooper Disguise based on the Star Wars: Rebels cartoon show. This figure is based on a season two episode of Rebels, but can also double as a troop builder when you put the Stormtrooper helmet on Kanan.

Time to open up some He-Man & the Masters of the Universe Action Vinyl Blind Boxes. These fun figures from the Loyal Subjects are based on the old He-Man figures and cartoon. I really enjoy these figures, but they are a little expensive to be sold as a blind box. I also have a bunch of fun Power Rangers Action Vinyls.

Posted by Buzz Chuck at 8:49 PM No comments:

The new Power Rangers 2017 movie is right around the corner and the action figures are starting to show up in stores. In this episode Alpha 5 and the Red Ranger have to battle the Black Knight while searching for more Power Rangers. I wonder what the personality of Alpha will be in the new movie. His voice will be provided by Bill Hader from Saturday Night Live in the film.

Posted by Buzz Chuck at 1:04 PM No comments:

If you are a long time reader of Action Figure Adventures you probably know I'm a huge Masters of the Universe (He-Man) fan, but you might also know that I like a short lived cartoon and toy line called King Arthur and the Knights of Justice. 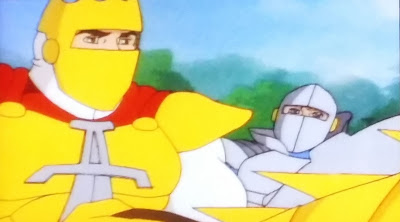 These two toy lines share an odd connection. Both toys were made by Mattel and on the back of the King Arthur packages the cross sell art shows Hordak's Slime Pit from Masters of the Universe was planned to be part of the King Arthur line. (No evidence can be found that it was produced.) 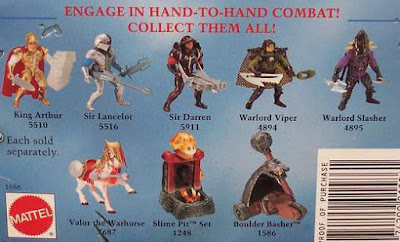 I don't know how closely Mattel worked with the creators of the cartoon, but it seems the cartoon came first and Mattel was hired to make the toys. The figures are all made in a similar style to the Master of the Universe figures and  the Boulder Basher features a recycled play feature from a Masters Toy. In the cross sell art the Slime Pit toy still features Hordak's face. While watching some episodes of the cartoon I saw the Slime Pit in an episode called Darren's Key. In the show it looks pretty much like the Masters toy, but Hordak's face was changed. 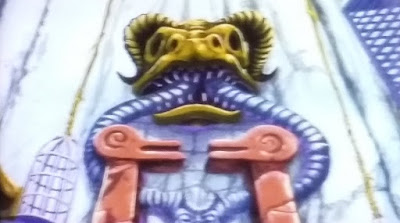 The fact that this toy that Mattel planned to recycle was featured in the show makes me think there was a lot more involvement from Mattel during the pre-production of the show. Perhaps the show producers came to Mattel with the concept and then Mattel came back with some mock-ups for the toys line. Then as the toys and cartoon moved forward both sides could incorporate what the other was doing. 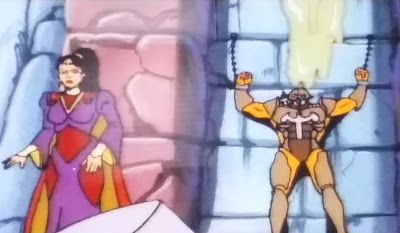 The cartoon lasted two seasons and the toy line only had one wave of figures. I enjoyed the cartoon in the early 90's and since I found out about the toys I have been having fun collecting them. I wish both had lasted a little longer. Warlord Blackwing could have been a cool toy. Stridor and Night Stalker, the robotic horses from Masters of the Universe might have been interesting recycled toys for the Warlords.  For more posts on King Arthur and the Knights of Justice check out this post about Sir Darren and Valor and this post about some of the other figures..