Back when I was a kid, my Mom brought home this giant cruise ship after she went out the get groceries. It was out for trash at the end of a neighbors driveway on her way home. She thought my sister would like it, but it's far to small for Barbies. My sister didn't really have any toys that would fit in it, because there aren't many toys in the same scale as the Glamor Gals. I quickly figured out it worked well with my 3 3/4 inch figures (although the windows are technically to tall).

I used the Cruise Ship with both my GI Joes and Star Wars figures. With the GI Joes, the ship was their Naval Flag Ship. I didn't have the Air Craft Carrier as a kid. When I played with my Star Wars toys the Cruise Ship was Jabba's Sail Barge. 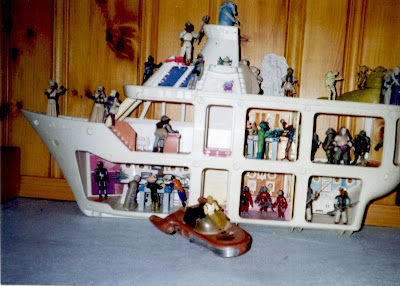 I've mentioned before that my buddy Derek and I used to take photos of "Set Ups" when we were kids. These set ups  rarely happened at my house, but we did play Star Wars almost exclusively at my place.

The tables that the aliens are hanging out at on the lower levels are made out of Construx. These 80's building toys were used to make lots of accessories for my action figures. You may notice the Rancor Keeper and several Gamorrean Guards right under Jabba. There is actually an opening in the floor that leads to that room. If someone fell down the "trap door" the guards would grab the victim and throw them out the back window of the ship to Derek's Rancor Monster. (We combined elements of both the Palace and Barge when we played with the ship)

The last item of note in the photo is my home made Han Solo in Carbonite on the deck behind Leia in Boussh disguise. At Derek's house, on several occasions, we made play sets by pouring plaster of Paris into shirt boxes full of tin foil and sticks. One time Derek's mom game use this great idea to fill a little container with sand. Then press Bespin Han Solo into the sand. Once we removed the figure we poured plaster into the impression. Once the plaster hardened we ended up with our own version of a very hard to find toy.  I may post more about this creation some day.

I reality this is a Cruise Ship that came with more than 50 accessories.  There should be tables, chairs, a shuffleboard game, a heart shaped pool, and railings. I never had any parts to it. That never stopped me or my friends from having a ton of fun with this girl toy.
Posted by Buzz Chuck at 9:54 AM