As a kid I always loved the "unmasked" figures. I always wanted the Prince Adam, Clark Kent, and Bruce Wayne figures. So naturally when they released a Dick Grayson  figure for the Batman: the Animated Series I had to get him. The down side to these figures, is that they frequently come with gear to make them both their masked selves and civilian selves. This makes both versions sub par. 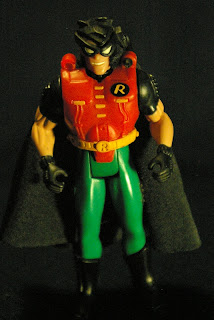 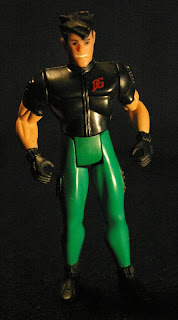 Here is Robin and Dick side by side. Robin has kind of bulky armor and a funny hose that connects his mask to his armor. His cape is nice and large. It clips on his neck like the old Super Powers capes. Robin also has clip on leg pieces that make his shoes look like boots.  In Dick Grayson mode he has a great head sculpt but wears green tights and a black monogrammed shirt. Nothing he ever wore in the cartoon. 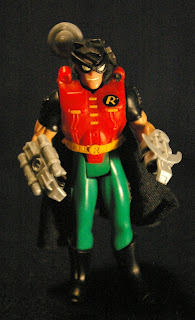 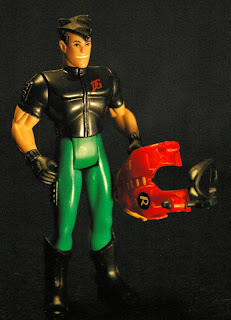 He also came with a ton of extra gear that I never really played with as a kid. He has a radar dish that snaps to his armor and wrist weapons. I really like the head sculpt on Dick. I kind of wish he came in his sweater that he typically wore in the show.

When I was picking characters for my stop motion animated show Action Figure Adventures, I knew right away that I was going to use Batman & Robin. I planned for them to be the first toys to try to escape the dorm room using K'Nex hang gliders. In the script my buddy Derek wrote for Robin to get down on one knee at one point. When I was talking to him about the episode I said "It can't happen, I'm dealing with limited articulation here." Instantly Limited Articulation became our Production Company.

For the stunt sequence where Batman & Robin went out the window, I was worried that my figures would get damaged so I actually hunted down another Dick Grayson figure at a yard sale to use as a stunt double. I gave him a quick custom paint job because I didn't have an extra set of armor. 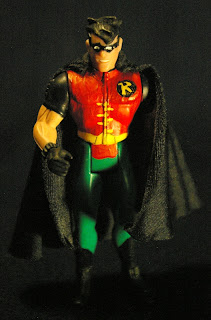