(I'm still suffering from a cold, so I haven't been up to blogging lately. - sorry)

Mattel has done a nice job of offering additional products to go along with their MOTUC figures. We've gotten weapons packs, figure stands, over-sized figures, a vehicle, and soon a play set.  The Great Unrest Weapon Pack is the only way to pick up extra weapons currently available on Matty Collector. I'm kind of surprised that the set didn't sell out. It's very cool and contains many accessories that were dropped due to budget constrains for figures many collectors own. There are also some more generic weapons as well. 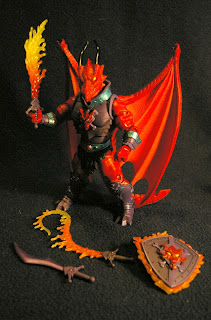 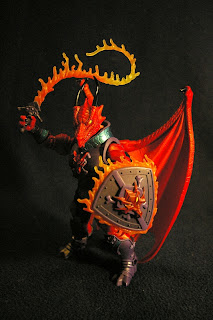 Draego-Man's Flaming Whip, Flaming Shield, and unflaming Sword are some of them most desired. Draego-Man is by far the coolest of the new characters created for the 30th Anniversary of Master of the Universe. The Four Horseman went overboard on the weapons and paint deco for the figure they designed. In the end he came only with his Flaming Sword. As an added bonus the flames can be removed from his shield, a feature that was not originally designed into the accessories. 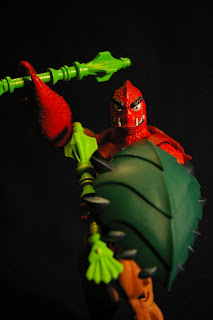 Perhaps the most controversial items in the weapons pack are the green weapons for Clawful.  The pack came with a green version of his shield that can work nicely with Merman.  The pack also came with another version of Clawful's mace that looks almost identical to his original. To bad they didn't do it in the same dark green as the shield.


The best thing for Mattel to have done, in my opinion would have been to include a green version of the mace that came with the Weapon Rack. That version has the diamond at the bottom instead of the shell and would offer fans a more vintage accurate accessory. 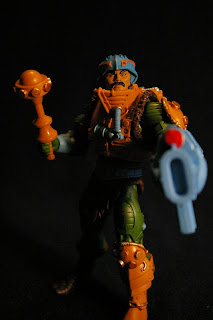 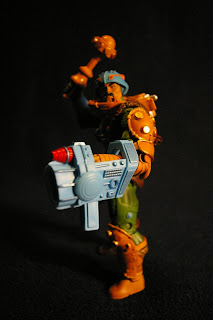 Man-at-Arms' 200x Arm Cannon. This is a much desired accessory  for many fans.  The cannon looks good, but you must remove his armor piece for the cannon to fit. The cannon fits over his arm and has a handle near the front of the gun. The hand on the original M-a-A is sculpted in a more closed fist and hold onto the handle better than the Roboto hand used for Snake Man-at-Arms. The SM-a-A figure is much more 200x in appearance, so it's a shame that the gun wasn't designed more for him. The cannon stays on him for the most part, but occasionally it slips out of his grip. 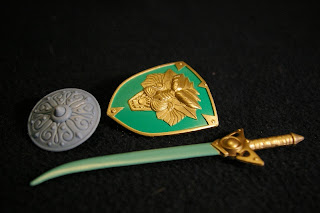 The weapons pack also came with a repaint of Teela's shield. This is meant for the vintage style Evil-Lyn figure. The weapons pack also included repaints of Chief Carnivus' sword and shield. Both of them are nice weapons, but I'm not really sure what to use them for. Maybe the cat-man palace guard. I don't display any of my palace guards with the snake or cat faces. 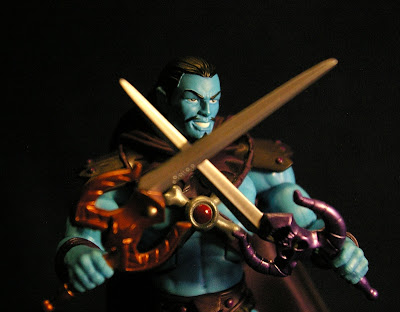 I think the weapon from this pack that I wanted the most beside the arm cannon, was Keldor's two part sword from the 200x series. This sword started out as He-Man and Skeletor's swords combined like how the vintage weapons clipped together.  Which was the reason He-Man needed the electronic Power Sword. This plot point was later dropped, but they retained the hero (bird) and villain (skull) decos. 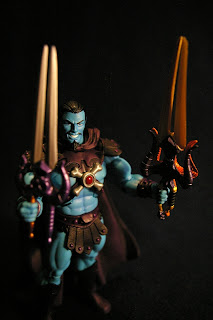 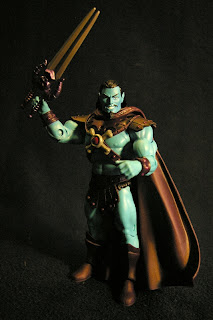 Here's Keldor with the MOTUC version of the Sword as well as the 200x version. The double handle is a little more sleek looking on the 200x weapon. Below you can see how the
swords clip together to form one weapons. 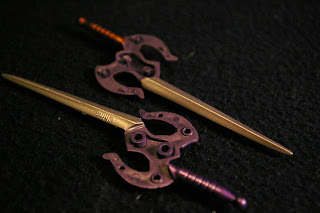 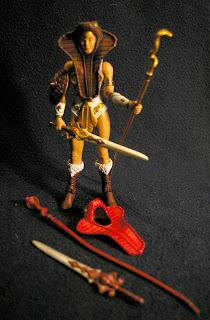 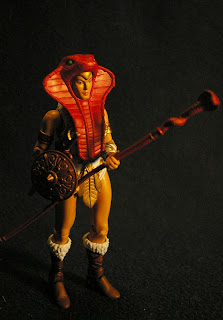 The Weapons Pack included more vintage colored accessories for Teela. These bright red versions of her armor, staff, and sword came in the set. It's odd that they included the 200x sword and not her vintage shield in the bright red vintage colors. 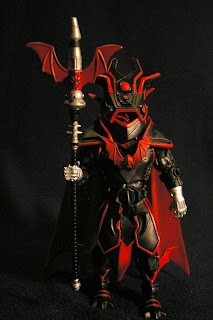 Horde Prime's dropped staff was another much desired accessory. It's a nice accessory, but I'm not a huge fan a ceremonial staff weapons. Although I do love the Havoc Staff, so if they are
also a weapon then I kind of like them. 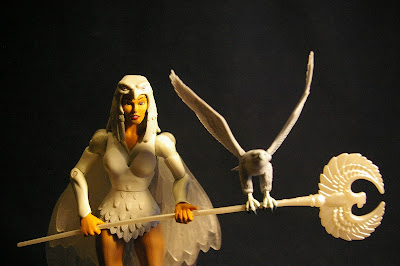 The last accessory in the pack was a gray version of the falcon to go with the Temple of Darkness Sorceress figure. Many fans want the next weapon pack to include armor and a perch for the bird. I can do with out them. 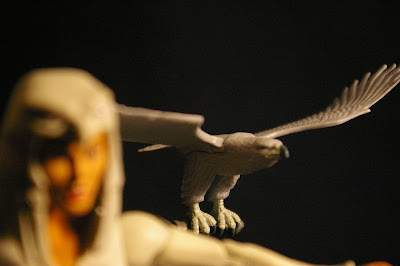