Mosquitor, the blood sucking member of the Evil Horde was one of the coolest Master of the Universe Classics figures in 2012. He captures the best parts of his vintage figure with a few updates. The figure uses the standard male body with mainly new feet, head, and armor. This version of Mosquitor features two small bug arms on his back, which has been common with many MOTUC updates of insect characters. Some people would have liked for him to come with blood tanks on his back like the Staction version had. I think they would have been cool, but may have made him top heavy. 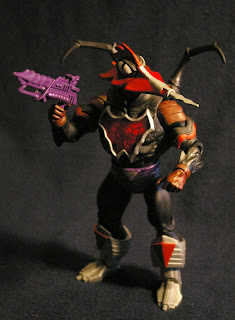 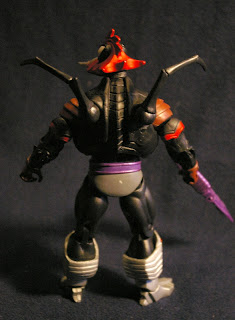 He comes with a little purple gun similar to the vintage figure. This time he has no working blood pump but they did sculpt nice details behind his translucent red chest plate. It would have been super cool if they could have molded the chest plate partially in red and partially in clear plastic. It would be hard to pour it into a mold and have it look like blood running down the walls of his chest. 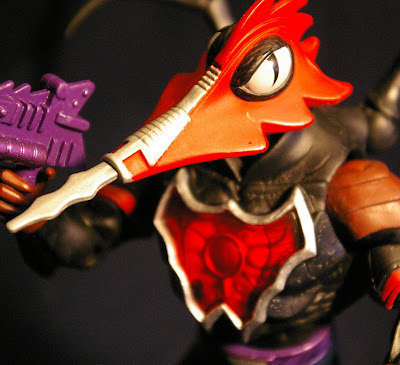 He turned out to be a great figure... one of Pixel Dan's favorites at least.
Posted by Buzz Chuck at 5:13 PM