Flash is the original laser soldier for the GI Joe team. He comes with a helmet, visor, backpack, and laser weapon. As with all of the 1982 characters there is both a "straight arm" and "swivel arm" version of the character. The straight arm Flash is on the left in the photo below. The  straight arm figures have one less point of articulation in the arms and a bulkier crotch pieces. I have always found it interesting that when Hasbro retooled the arms they did not make unique  upper arms for Flash. They used the standard long sleeve shoulders tooled for other Joes. Then they applied a red paint app to represent that pad that was sculpted on the original release. 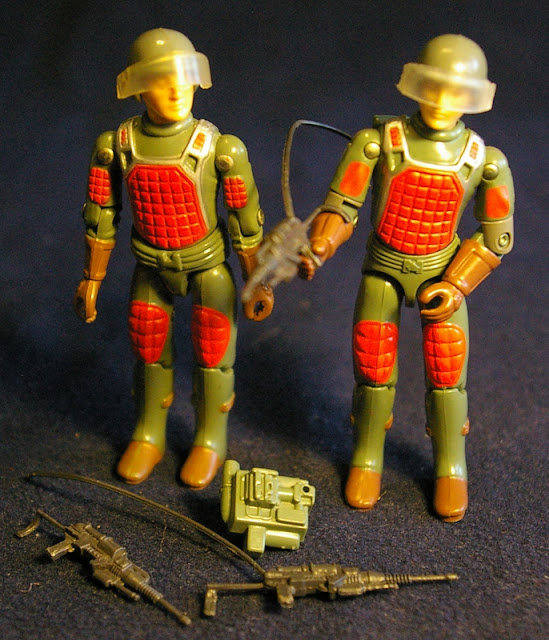 Flash shares his entire uniform with Grand Slam. Snake-Eyes has the same boots. His head sculpt is shared with Hawk, Steeler, and Short-Fuse. Flash never really got a lot of "screen time" in the comic or cartoon show. 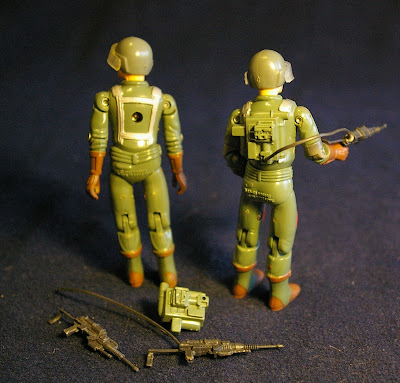 I owned many of the '83 figures as a kid, but Flash was not one of them. I picked him up later, after I was a collector.
Posted by Buzz Chuck at 11:16 PM