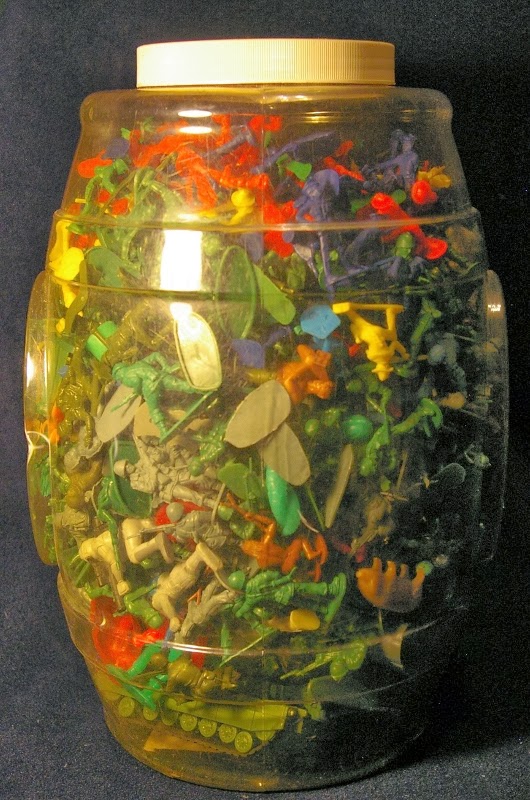 So I have this big barrel of plastic figures, and I've been meaning to photograph and post about some of the figures for a while now. Due to the fact that I have hundereds of other toy also photographed and waiting to be posted about I never seem to get around to these guys.


I personally hate "themes" for a week. I like to have a lot of variety to what I post about. Unfortunately unless I put my nose to the grindstone this barrel will take me forever. So I'm gong to be focusing a little here.


I know I won't post exclusively about the barrel, because tomorrow night there will be a Masters of the Universe themed episode of Toy Hunters and I'll want to post about that.


Anyway, this is a big old hard pretzel barrel that houses all my cowboys, Indians, army men, and many other things. It's so old the clear plastic is yellowing. I tried to do some research on these figures so I can post some decent information. Unfortunately many of the figures have no real markings on them making it hard to find out much. 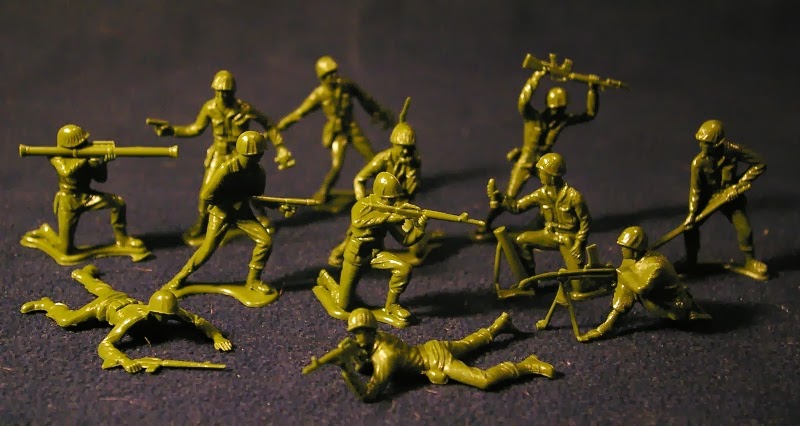 First up, the little plastic army men that came with my Rescue Helicopter that I posted about back at Christmas time. They are made by Tim Mee. Now these figures were finally added to the barrel to live with their plastic army brethren. Lots of great poses. I like the guy holding his M-16 above his head. I assume he's wading though a river.


A lot of the information I found on my plastic soldiers comes from Toy Soldier HQ. You could spend hours sifting through the site. I know I did. From what I can tell the next two photos feature army men that were cereal premiums from Kelloggs. I believe they were made by Lido, even though some of them were copies of Marx toys. 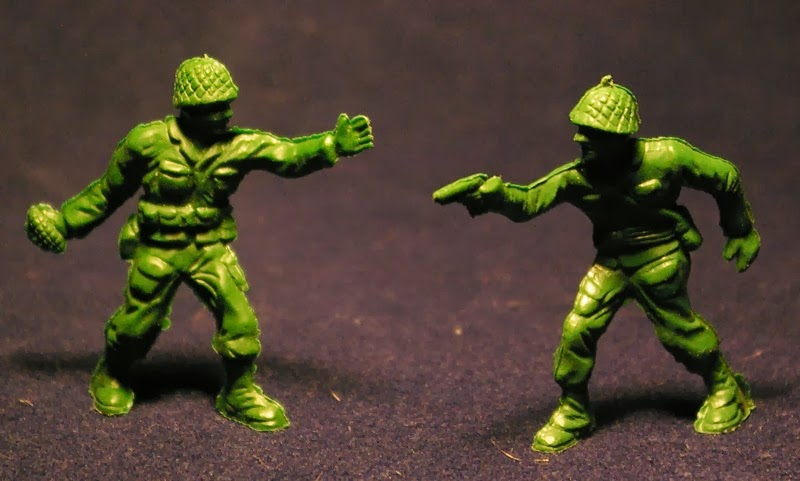 I always liked he guy ducking but still trying to get a high-five from someone. I've had these guys for years, but I think I picked them up at a yard sale as a kid. The figures were grouped in these two pictures by color. The figures in the lower photo are a brighter green. 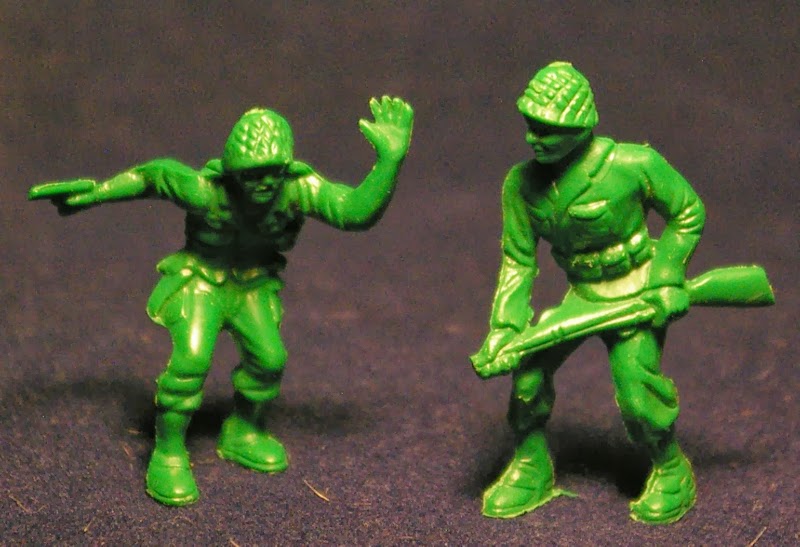 Next up are some Cavemen made by Dimensions for Children (DFC). They are stamped 1980 on the bottom. I bought a few of these guys in two different batches at yard sales as a kid. I also used to have one holding a boulder over his head. 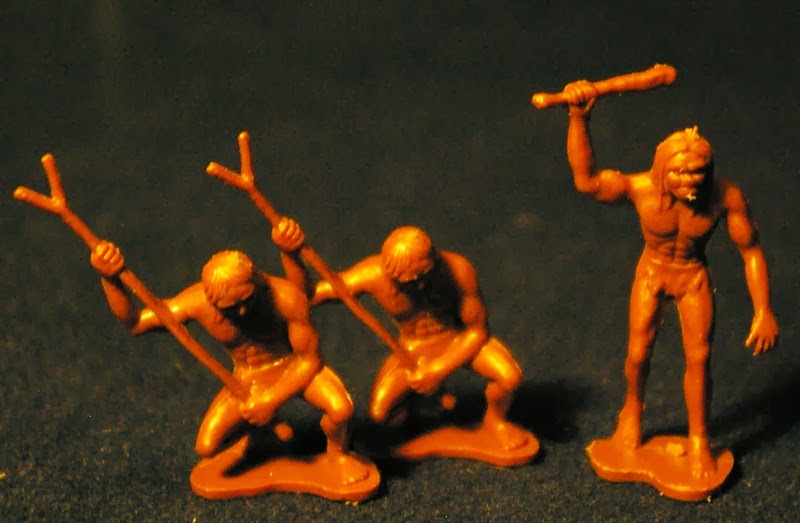 A while ago, my buddy John from Clawful Punch (formerly the Cosmic Arc) sent me a package that contained some bright red cavemen. These newer cavemen are made by Tim Mee based off molds from Processed Plastic. While they aren't the same molds they do remind me of each other. 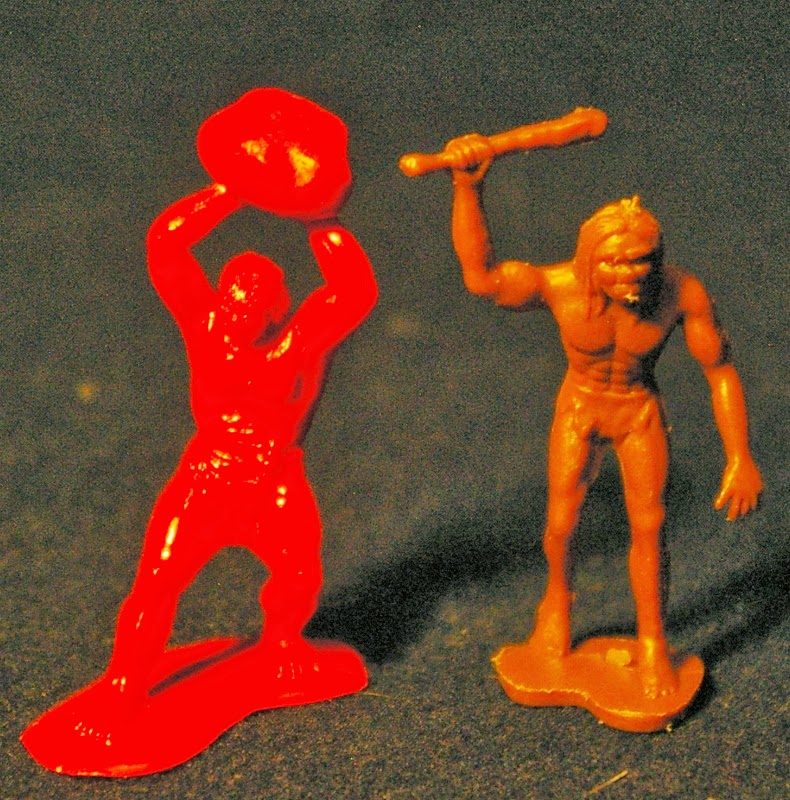 I believe the dinosaurs below were also made by DFC and released in the same set as the brown Cavemen. I had tons of these dinosaurs in lots of different colors as a kid. Most of them are very thin or flat. There were other dinosaurs in this line as well. 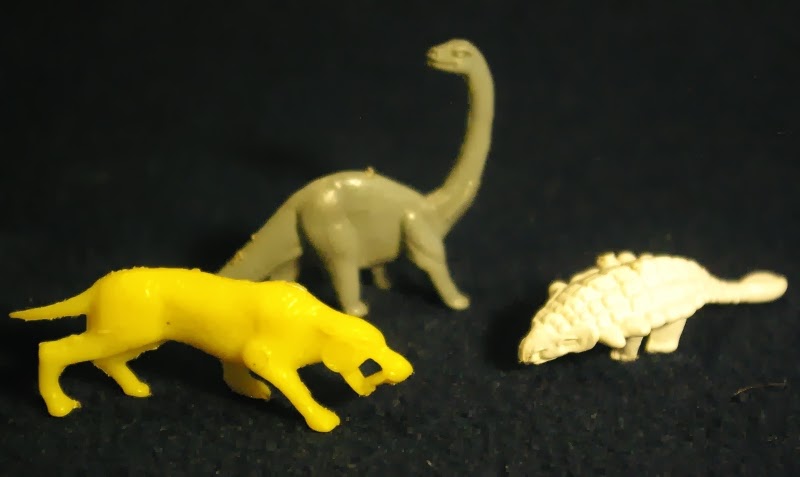