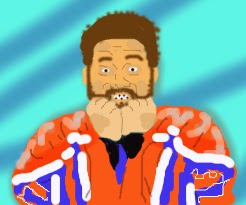 Comic Book Men started off talking about made for TV horror movies the boys remembered from their past. They boys each had a favorite, and they picked on Bryan more than Ming for once.

The first customer brought in a Batman bag and bowling ball. The custom ball just happen to fit Walt's hand. Ming mentioned that the guys from Clerks had a team. So the clerks from the Stash are going to bowl against the cast from Clerks.

I've seen some cool bowling balls over the years including one that looked like a soccer ball. One of the kids on my bowling team at school even had a Darth Vader ball. The all yellow bat-ball was pretty striking. (strike, get it?)

The next guy who came in to the Stash is a known dealer in this area. I've bought stuff from him at NJCC and Retro Con. He brought in several issues of Famous Monsters of Filmland magazine printed by Warren. He said his father worked for Warren Publishing and shared a few stories. My good friend Doug Moench wrote for some of Warren's horror comics before going on to write Batman.

Then a young guy brought in the Punisher figure that transforms into a gun. When half transformed the Punisher looks like he's got a big silver missile firing member. The boys of the Stash all got a good laugh out of the figure.

The show ends with the big bowling showdown. The Clerks team includes Jay, Dante, and two lesser known actors from the film. The Clerks  team was throwing a good game, but the Stash Workers sucked. Walt switched teams because he played four roles in the movie Clerks and the Secret Stash team was loosing. Then the tide started to change. It was up to Mike to win the game.

It was a decent episode. Fun but possibly the least educational episodes. The bowling ball, Punisher figure, and bowling match didn't really draw any attention to a famous comic issues or licensed properties. At least there was a little something to learn from the Monster Magazines.
Posted by Buzz Chuck at 12:37 AM