I have been sitting on these fine artifacts for a while now, and then I forgot to write up this post for Valentine's Day. Here is an array of Pop Culture Valentine Cards.from the past 20 years or so.

Mmmmm.... 90's.... X-Men... must be 3rd grade. I was obsessed with the X-Men back then. The Toy Biz toy line had just started, and I had every figure from wave one. I had a subscription to Uncanny X-Men comic book. Everyday at recess Nate Ballard and I played X-Men. He was always Wolverine and I was Iceman. These are a couple of cards left over from a Valentine long gone. 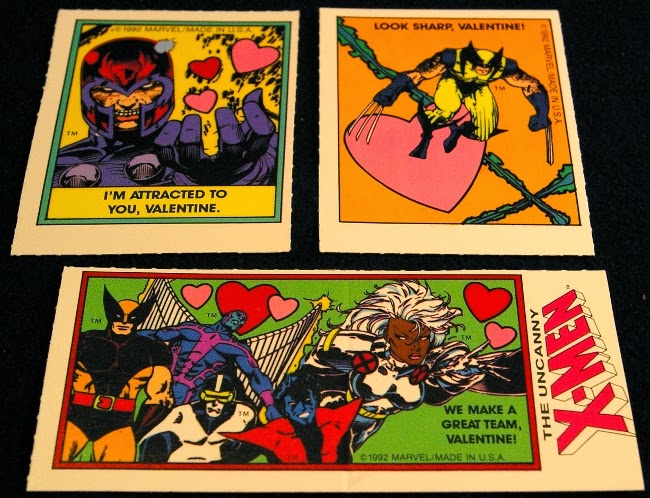 These Batman Valentine Cards are also left over from Elementary School. They feature great art by the late Jim Aparo. I remember giving one of these to my best friend's dad, bat-author Doug Moench. I know there were cards in the set featuring the Joker and Catwoman.

I've been buying little kids Valentine cards and candy for all the other teachers at the school I work at each year. I fill out the cards and throw them with a piece of candy in each person's mail box. I usually buy them at the dollar store, so they are a year or so out of style. Not that anyone who is getting them minds. 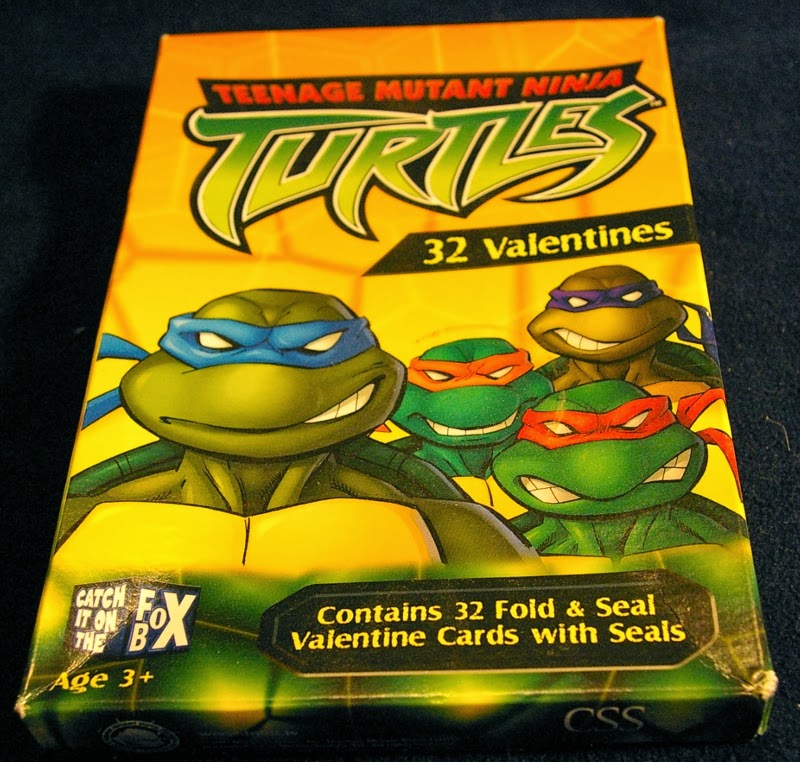 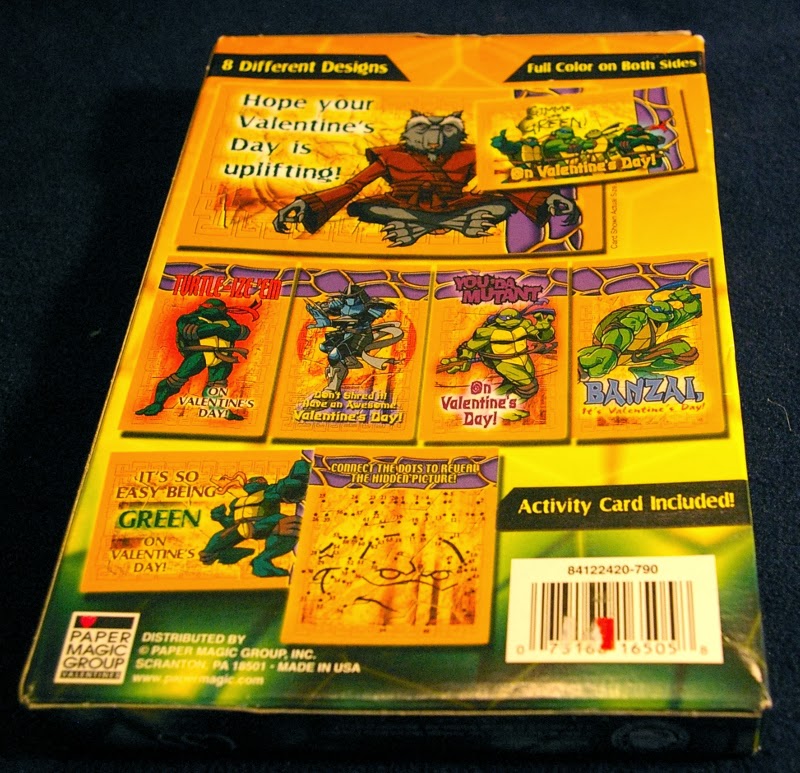 Here are some 2000's Teenage Mutant Ninja Turtles cards. The boxes bring back memories. They always had a couple of extra cards printed on the back of the package. When I was in school the cards came with little envelopes, but now they just get folded in half and held closed with a little sticker. 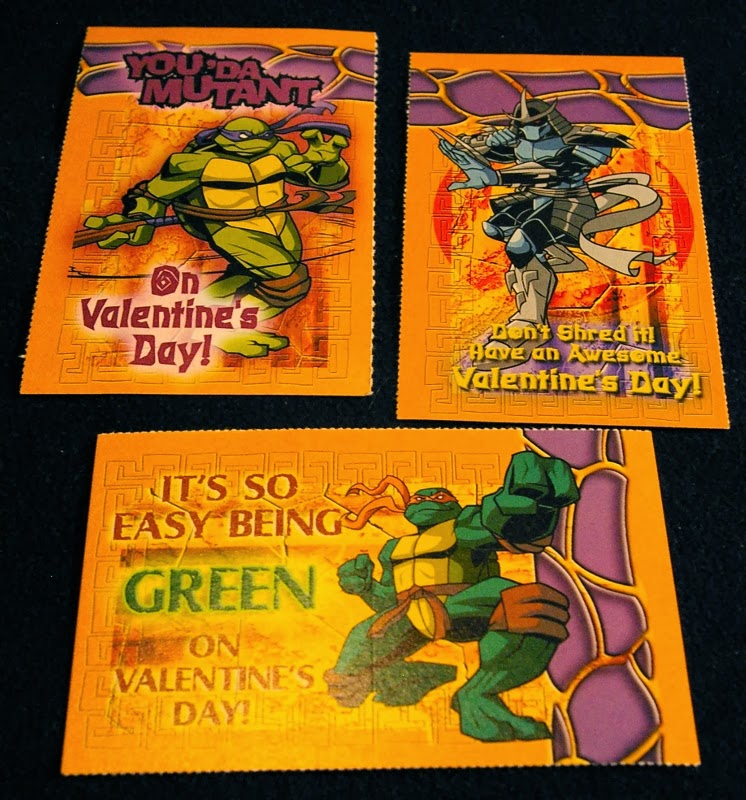 Here are a few modern era Batman Valentines. Again these were bought for my co-workers. I didn't buy cards this year because I though for sure we wouldn't have school because they were calling for snow. We ended up having a two hour delay. I guess if I had bought the cards I might have remembered to post about these on the correct day.

Superman Returns, everybody loved that movie right? No, okay. Well Brandon Rauth still makes for some nice eye candy to be featured on a Valentine Card. 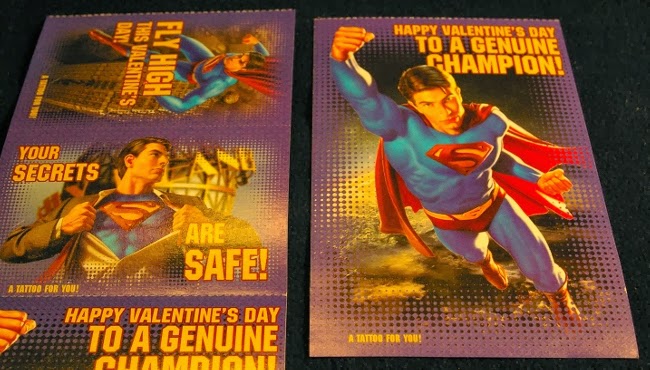 One of my closest friends at work is a huge Simpsons fan, so I bought a box of them the one year. I really wish one of them had a train on it and said, "I choo-choo- choose you." 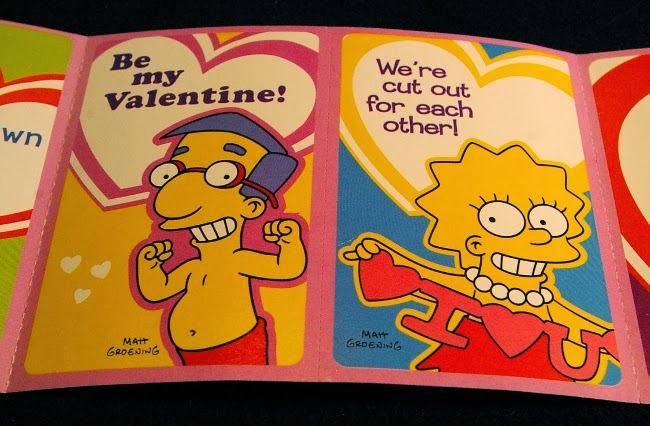 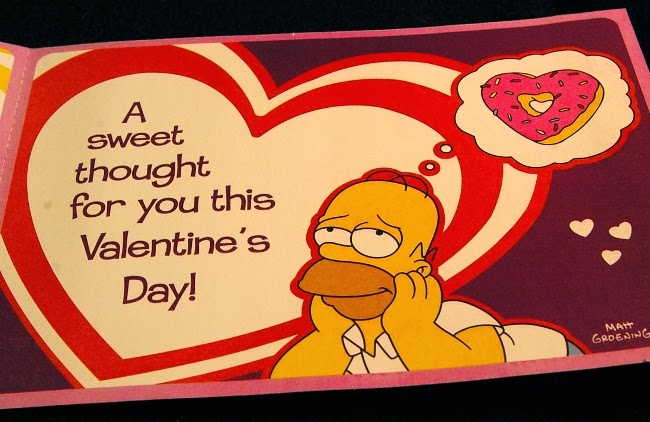 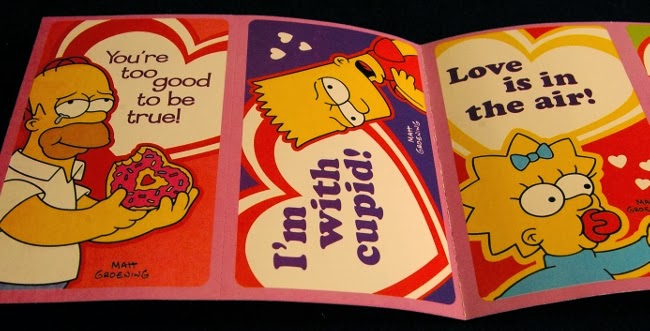 Godzilla Valentines would have been a hit when I was in 1st grade. Everyone in my class was obsessed. I found a box of them a few years ago, but there were no Godzilla movies out at the time and all the art work features photos from the old films. What an odd set to be released in the 2000-teens. 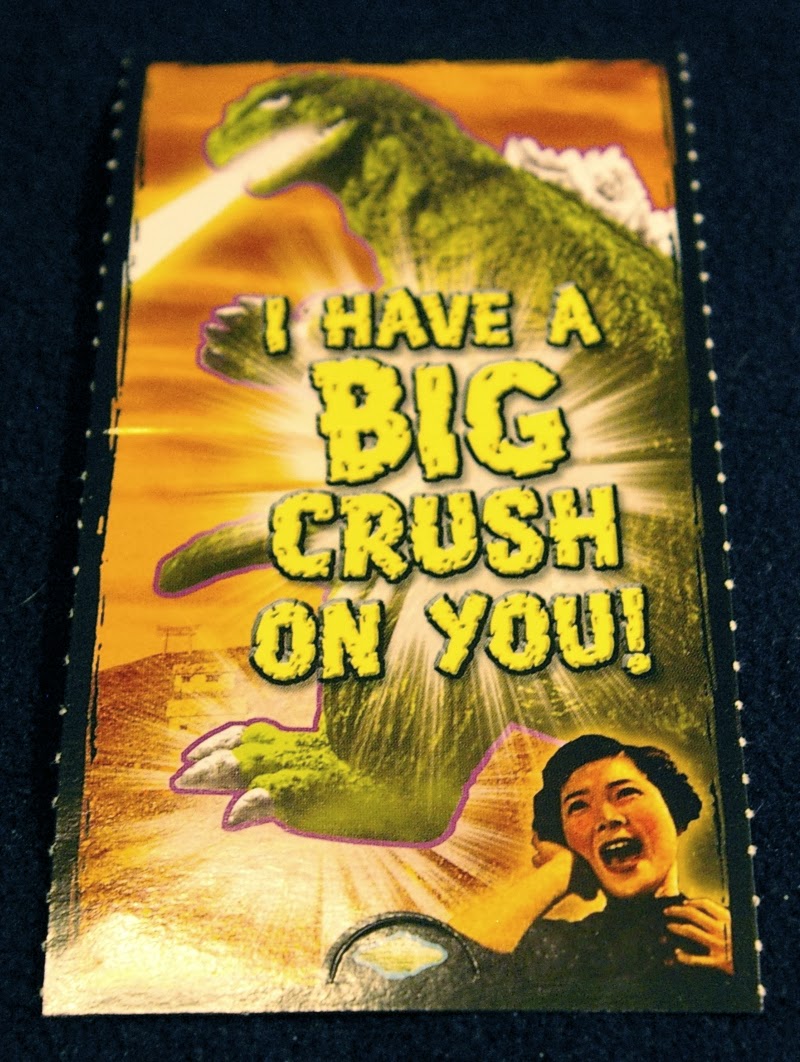 This Jim Henson's Dinosaurs card is left over from Elementary School. I loved that show. I even had a few action figures from the show. I eventually sold them at a yard sale. "Not the mamma!" 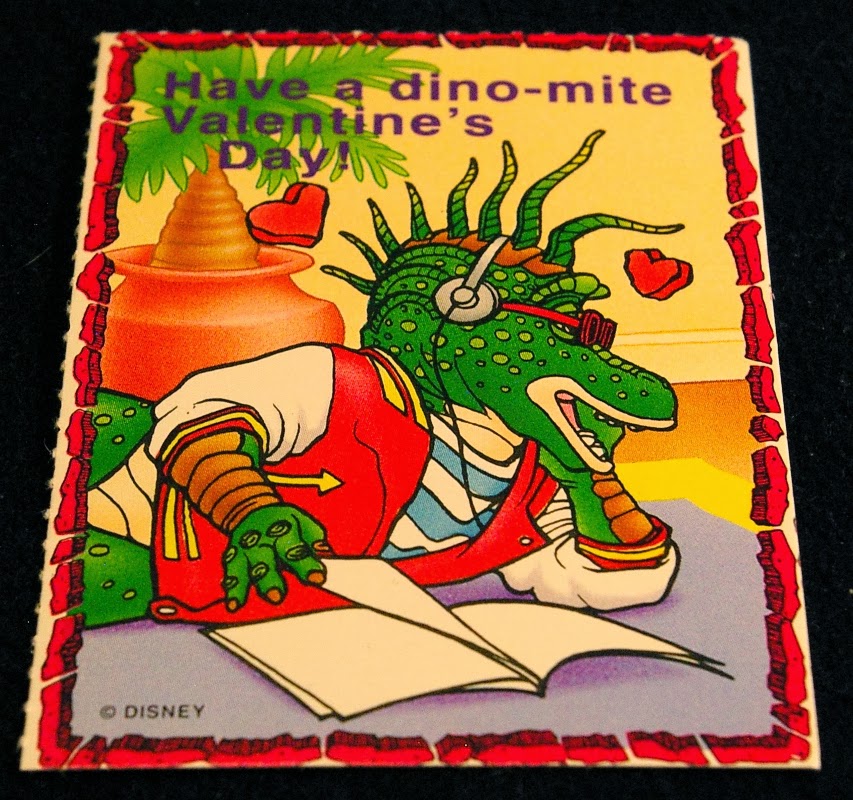 I actually picked up a box of 90's Spider-Man Valentines at a thrift store a few years ago. I used them one year for my co-workers, but saved one of each design for my collection of comic related merchandise. These cards were released to go along with the Spider-Man cartoon which I watched every day after school in 5th and 6th grade. 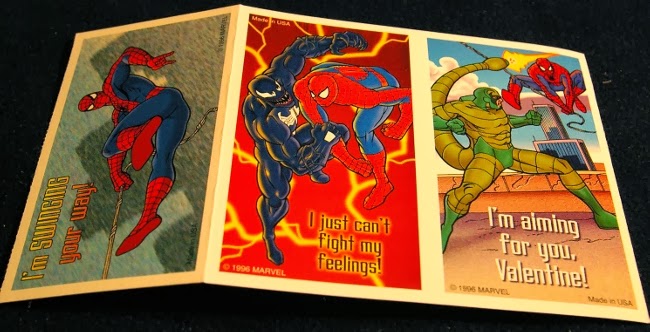 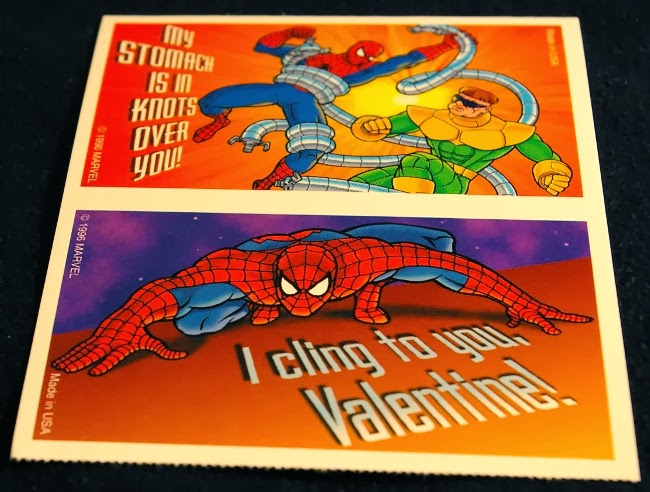 I also picked up a box of Animaniacs cards at the same thrift shop. A couple of my co-workers got a real kick out of my retro Valentines that year. "We're the Warner Brothers. and the Warner Sister!" 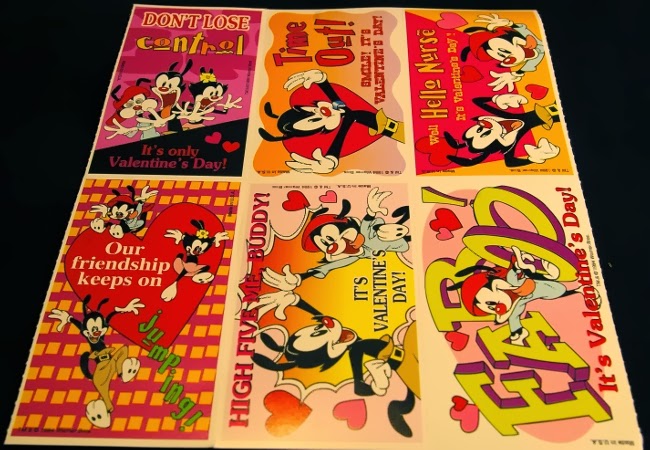