Time for some more little tiny plastic men from my big old barrel. I'm not exactly sure when it was, but in one of the early years of my career, the French Teacher from across the hall from me at work was having the kids make little Mardi Gras floats out of shoe boxes in class. She mentioned that she was looking for some little people to put on the floats as passengers. I told her I'd find her some people. I ended up going to the dollar store and bought three bags of little plastic figures. One bag contained Cowboys & Indians, one contained Firemen, and the last Police Officers. I used wire cutters to clip the weapons off some of the figures since they were supposed to be in a parade. Most of the little figures went into school, but I threw a few of each design into my barrel of plastic men. 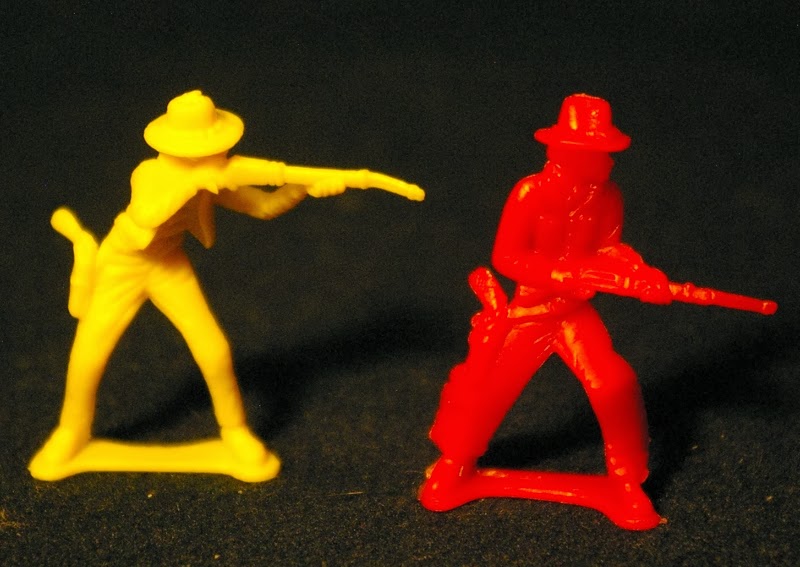 First up are two Cowboys with rifles.  The various poses came in yellow, red, blue, and green. 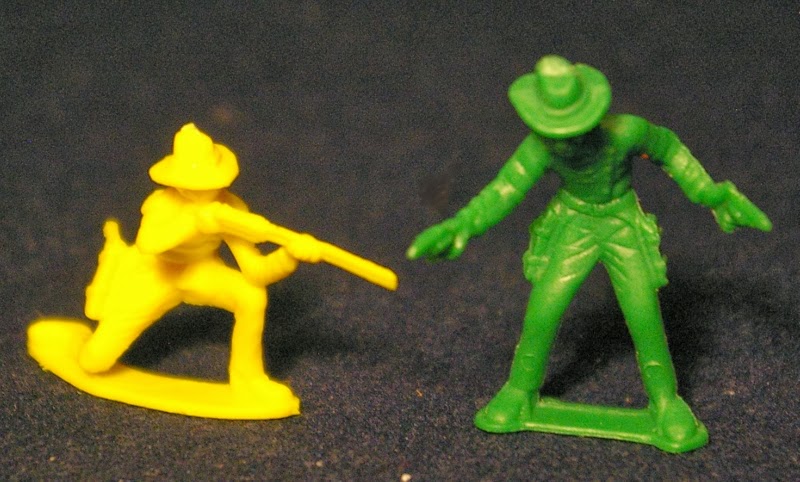 Next I've got a crouching Cowboy and one with two six-shooters. Many of these seem like fairly classic poses. I wish I knew what brand these little dollar store figures were.

The next photo shows off the Indians from the set. Some have spears, rifles, and other have bows. 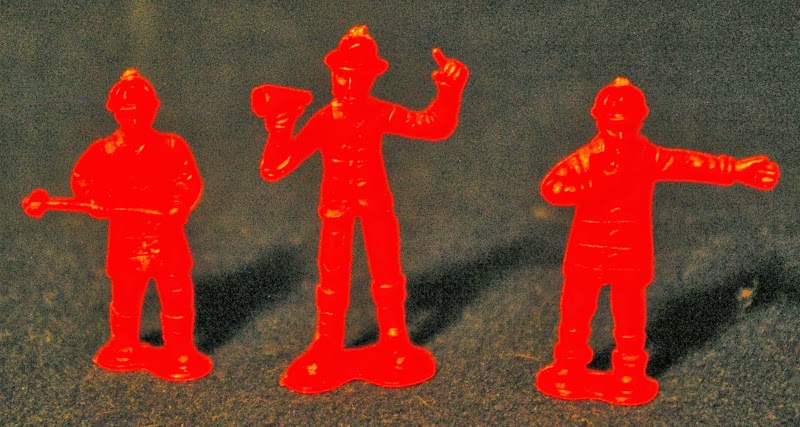 The Firemen worked a little better for people on floats. I also didn't have to modify the figures so much. Here we see one with an ax, one with a bullhorn, and the last appears to be directing traffic. 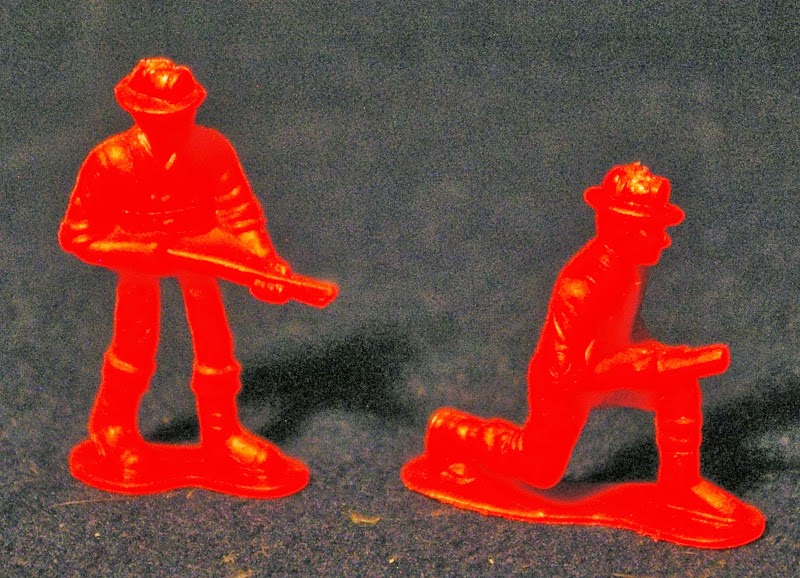 All  the Firemen are molded in bright red. These two heroes are holding hoses.

The first three Police Officers are unarmed. They are all in various traffic directing poses. Although the third may be giving chase. All the cops are molded in blue. 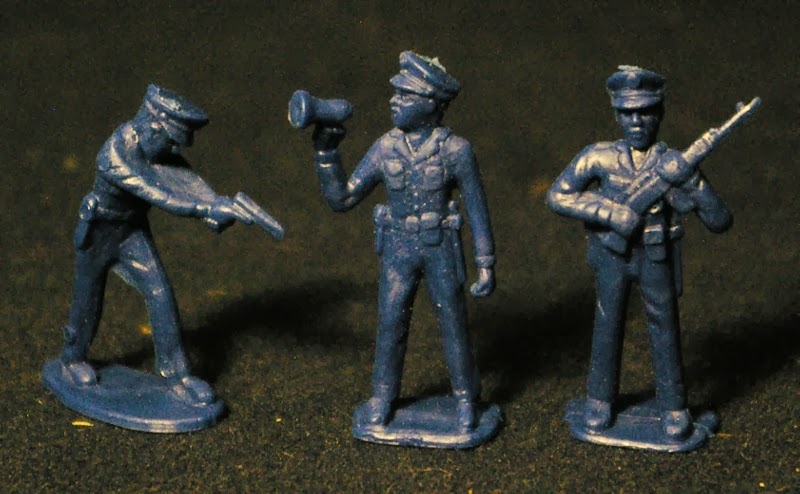 The first Cop cracks me up. Is he aiming at a guy on the ground or about to blow some one's knee cap off. The second Officer has a bull horn and the final one looks like a prison guard with his rifle across his chest. 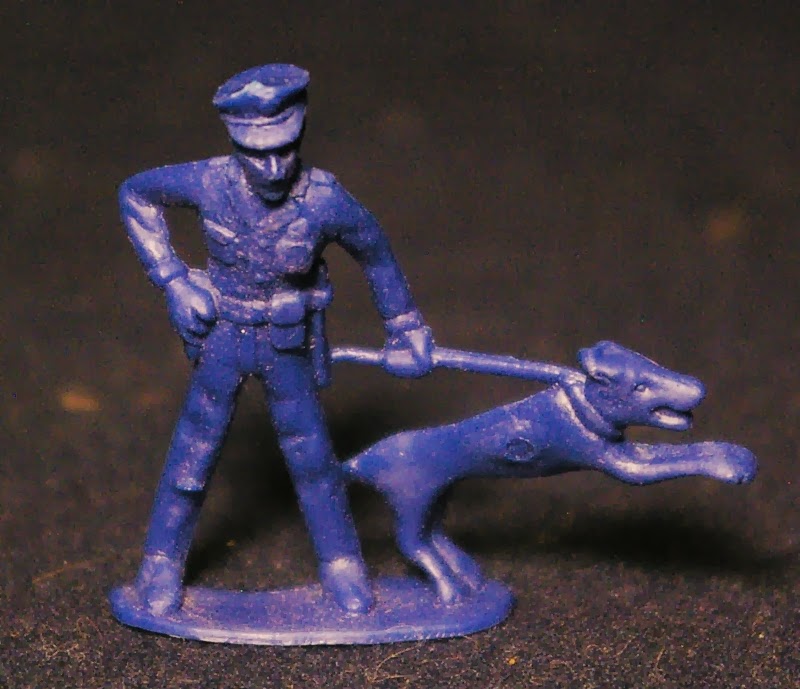 I saved my favorite of these little plastic people for last. The K-9 Unit is awesome. The Police Officer looks so chill and the dog is in total attack mode.
Posted by Buzz Chuck at 7:15 PM