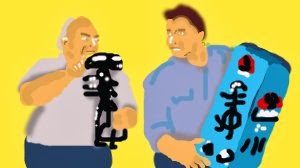 Steve and Jordan went to Arizona to buy toys to sell at New York Comic Con. Jordan picked up two carded sets of the original 12 Star Wars figures along with others.  Steve picked up a couple of older items including an early stuffed Ronald McDonald doll.

Next they traveled to Florida to buy more Star Wars. They started off buying a boxed Wampa and then a vintage B-Wing. This may be the first episode where Steve did the narration about a toy when they cut way to the video montage. He's not quite as polished as Jordan. This guy had a ton of crazy Kenner vehicles and playsets. Finally Jordan started negotiating to buy a prop replica of the AT-AT and Rebel Landspeeder.

As usual they showed off the sites and sounds of the convention as well as Jordan's booth. He had all the carded Star Wars figures graded by AFA (the grading company, not my blog). I did like that they showed a quick behind the scenes look at the inspection, grading, and encasing process AFA uses on the toys they grade.

The case to the Prop Replica AT-AT was damaged in shipping, so then Jordan was even more desperate to sell the carded figures. They visited a lot of other dealers and someone gave them a lead on a guy in Cape Code. Despite some drama, Jordan did sell the set of 12 figures, plus 3 extra characters from the first movie to a Sea Captain in Cape Code.

This wasn't my favorite episode, but it wasn't bad either. I would have liked to have seen some of the rare Power of the Force figures from the end of the Star Wars line. If you love vintage Star Wars you won't be disappointed by this episode.
Posted by Buzz Chuck at 12:16 AM