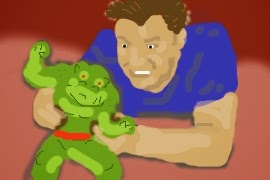 This episode Jordan met up with Scott  AKA "Toy Guru" from Mattel at SDCC. Scott asked Jordan to find the four rare foreign releases from the tail end of the Masters of the Univerrse toy line. Mattel's plan is to display the entire line of vintage Masters figures at next years SDCC.

Next Jordan went to a toy collector's house who collects internationally. He looked at some Micronaut figures there. They dedicated a considerable amount of time talking about Doctor Who. Jordan picked up a 4th Doctor figure on an Italian card back. Finally Jordan finds one of his guest pieces. Tytus the heroic giant. This is a character who has only been released in the United States as part of the modern MOTU Classics
line.

Next Jordan heads to Tennessee to find the Laser Light figures from the Masters line. First he finds a carded Orko figure.  Jordan talked a little bit about the movies Small Soldiers. Finally he gets to see Laser Light Skeletor and  Laser Power He-Man. Unfortunately the card back on He-Man was in bad shape.

Lst Jordan heads to NYCC to bring his finds to Scott from Mattel. Scott immediately zeroes in on the quality of the card backs. In the end he was impressed with Tytus and bought the lot of three toys. I can't wait to see Mattel's display at SDCC.
Posted by Buzz Chuck at 11:53 PM