I got home from work at the hayride last night a little after 11 PM and watched TV for a bit. I woke up on the sofa at 6:30 AM to my phone ringing. It was my buddy Dave asking if I wanted to go the the Flea Market. Let's do it!

I bought a lot of Master of the Universe figures. Prince Adam, Battle Cat, Sy-Klone, Man-E-Faces, Battle Armor Skeletor (feature still works) and a Remco knock-off (not pictured). I passed on a lot of Transformers that I saw the last time I was there. The guy wants to much for them. 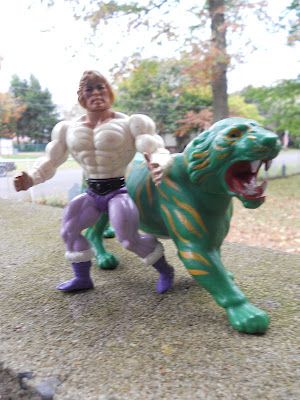 I didn't have a Prince Adam before. Battle Cat will go in my bin of toys for kids
to play with when they come over with their parents. 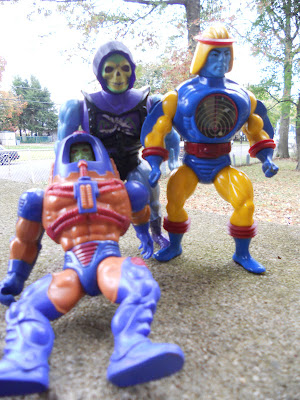 Battle Armor Skeletor will replace the one in my collection because the one I had did not
have a working action feature. The broken one is going in the kids bin (so there is at least one MOTU villain). I'm not sure what I'm doing with my duplicate Man-E-Faces and Sy-Klone yet.
Posted by Buzz Chuck at 11:42 AM