As many of my readers know, I like to make stop motion animated videos with my action figures. I mostly animate them for reviews these days, but I used to do video series that were more like tv shows.  (Animation Creation: the series & Action Figure Adventures: the series) So, from time to time I buy a toy, not for the figure but for one of it's accessories. It can be difficult to find toy sized props some times. This Superman came with clothes and a wig with glasses so he could be transformed into Clark Kent. I felt like the wig & glasses would make for a humorous disguise in a video some time. 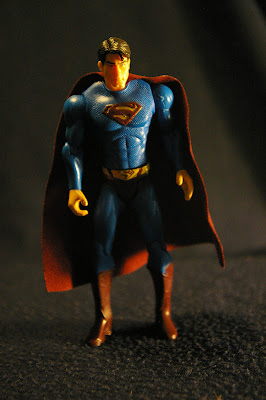 So this movie Superman toy has nicely sculpted details and good paint apps. He has a cloth cape that is permanently attached to the back of his neck. He has decent articulation, swivels at the shoulders and hips and hinge joints at the elbow and knee. His Clark Kent accessories are in a box with other animation props and so I didn't dig them out to photograph. I display this figure as Superman with my DC Superheroes. 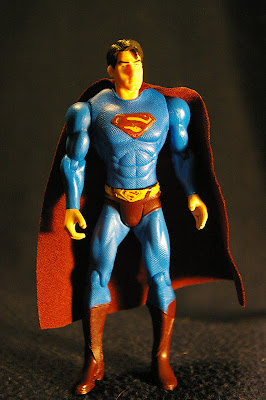