In the 80's there was a very grotesque stuffed animal for boys called My Pet Monster. Another great 80's creation from American Greetings, who made the Care Bears and Rainbow Brite. The monster doll came with cool plastic handcuffs with a link in the middle that could "break". Later on a cartoon was made based on this concept. A much cuter version of the monster doll was owned by a little boy and every time he unlocked the hang cuffs the Monster would come to life and they would have wacky adventures. The Monster even had a thing for the kid's older sister. My Pet Monster was also made into a low budget live action movie similar to the Garbage Pail Kids movie.

Below of two different original animation cels from the show,. One shows the doll version locked up and under the Max's arm. In the 2nd cel the monster is alive and telling us to be quiet. 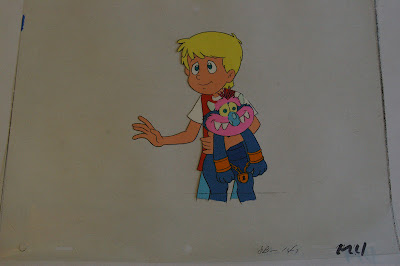 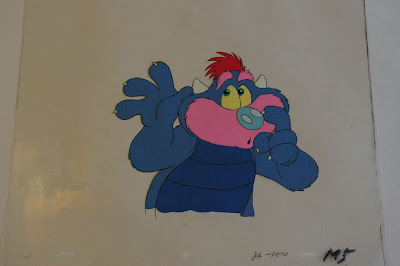