In honor of the release of the MOTUC Rattlor figure, I decided to post about the vintage figure. I will start off by saying I am not a huge fan of the Snake Men faction in the Masters of the Universe world. If all the Snake Men were like Rattlor I'd love them. He has all the key features of a snake, including the eyes, mouth and tail. Rattlor also features nice scaly details. Many of the other Snake Men are missing tails or have more humanoid faces. 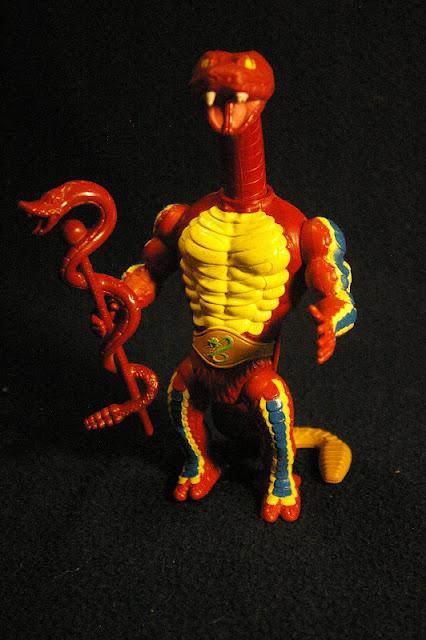 Rattlor's action feature is his extending neck / striking action. This is activated by a button on his back hidden under his tail. He also has some small pieces inside him that gives him a rattle sound. His only weapon is a Snake Men staff. His tail is made from a flexible but not really possible plastic 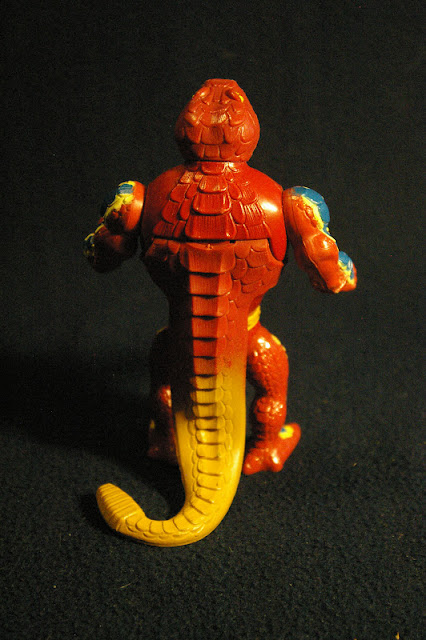 Rattlor has nice paint decos.  He has tan and blue stripes on his arms and legs as well as tan scales on his tail and chest. There are both tan (yellow) neck and red (brown) neck variations of Rattlor. This particular example is a red neck (ha ha). I never had Rattlor as a kid, but he is pretty cool. I also think he looks a lot better as a toys than he did in the Filmation She-Ra cartoon where he appeared as a member of the Evil Horde.
Posted by Buzz Chuck at 4:36 PM