Back in the late 90's and early 2000's I was cranking out custom toys left and right. I used to buy lots of GI Joe figures at yard sales and flea markets to us for this hobby. One time I came across a seller that had several of the same Duke figures. I bought them up with a plan to create a desert themed GI Joe strike force. My buddy JboyPacMan from Revenge from the Cosmic Ark recently posted his Duke figure and this made me want to post my Desert Assult Squad (DAS). 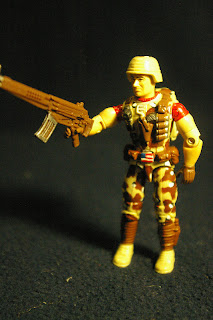 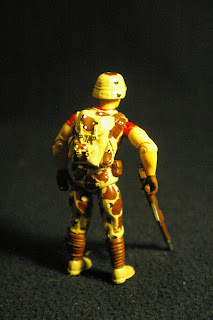 Duke - I had this version of Duke as a kid and really liked the sculpt. I just always wished he had better colors. Growing up in the 80's and 90's made me a fan of the "chocolate chip" camo from Desert Storm. My goal was to cover up as much of the red on the figure as possible. The sleeves were left red, because it's almost impossible to avoid paint chipping on that shoulder joints. So this Duke is the leader of DAS. He is equipped with this gun, helmet and a painted up Big Brawler backpack. Duke is the only member of DAS that I painted his belt buckle to look like the flag. 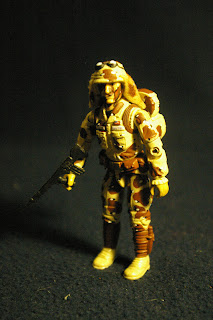 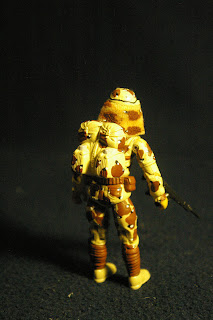 Dusty - DAS has to have the Joe desert specialist on the team. Dusty was actually one of the last figure I made for the team. I didn't have a spare Dusty to paint up when I first started creating these figures. This figure used Dusty v1's head, torso, and arms with the legs and waist of the Duke used for most of the team. He carries his usual gun and backpack. 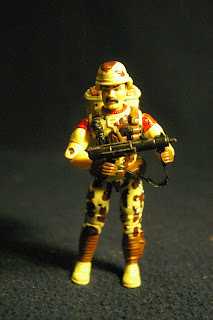 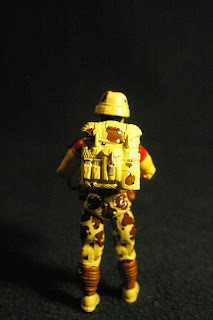 Bazooka - one of my favorite GI Joes who suffers from having a goofy costume. This figure uses the Bazooka v1 head on Duke's body. He has his bazooka and a custom painted weapon pack Lowlight backpack. Due to Bazooka's usual uniform, the red sleeves almost seem normal. 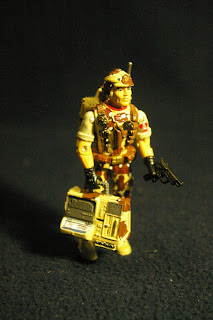 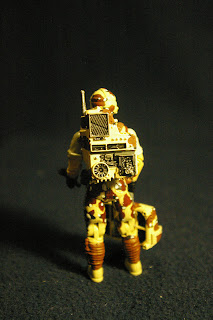 Mainframe - This Marine Corps communications and computer expert fills an important role in DAS. He is made from a Mainframe v1 head and arms on the Duke body. He is equipped with custom painted versions of his computer and backpack. He is also packing a 2000's era pistol. 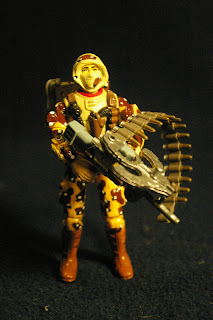 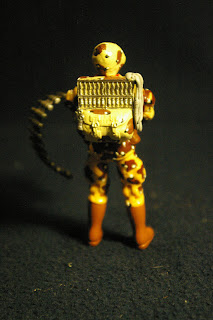 Sandstorm - is the first new character I created for DAS. He is a heavy weapons soldier with extreme environment training. He is made from a Spearhead body with the Duke torso, and a Storm Shadow v2 head. His gun is from a Kenner Robocop figure (Birdman Barnes) with an additional ammo belt. He also features a custom painted weapons pack version of Spirit's back pack.