I ordered the Big Bad Toy Store (BBTS) Exclusive Dreadnok and Marauder sets. These two 7-Packs contain 80's and 90's GIJoe and Cobra figures updated to today's toy standards. One of the figures in my Dreadnok set came with two of the same hand. I noticed it after opening the package and removing all the figures. I posted a question on the Toy News International (TNI) Forums about if I should contact the retailer, BBTS, or the manufacture, Hasbro. Everyone seemed to think I should contact BBTS. So I emailed them and the sent me a new figure. I was impressed with how quickly and easily they resolved my issue. 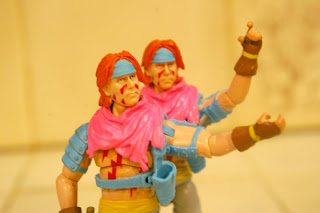 Weird figure isn't he? It was the 80's when the original version was released, and he was pretty cool back then. His ripped up shirt (or scarf as many call it) is much larger on this version and his hair is longer. The modern figure has better articulation and a more appropriately sized head. The original figure featured color change skin... one more thing that added to his coolness and bizarreness.
Posted by Buzz Chuck at 5:24 PM No comments:

Toy Hunters featured a professional toy dealer who was going on a road trip to buy toys to sell at the NY Comic Con. He went out to Cincinnati Ohio to follow up on some leads. Kenner, the company that made Ghostbusters, Super Powers, and Star Wars, was based in Cincinnati so there are lot of former Kenner employees around and a lot of rare samples and prototypes. He found some crazy stuff and made a deal to broker a Rocket Fire Boba Fett figure for a comic store owner who had one in a random box in his back room. The guy also went to Florida to see a guy who worked on the Thundercats toy line. He made a deal to broker a Mad Bubbler prototype for him. He also bought other stuff from various people including some MISB MASK toys. In the end he sold the Boba Fett for $17,000 at Comic Con.

Robot Chicken was unlike a standard episode, but similar to other season premier episodes. It showcased many of the characters created for the show,  used the Robot Chicken and Mad Scientist, and the characters based on the shows executives. There were less "skits" and focused mostly on one story involving the Robot Chicken escaping from the Scientist only to have to fight his way back into the Scientist's castle to save his chicken wife. It was a good episode, but I enjoy the skits where they spoof a toy line or movie more than the stuff that takes place in the "Robot Chicken Universe". There was an appearance by Mo-Larr: Eternian Dentist, which I enjoyed. The SDCC exclusive Mo-Larr is what got me into the Masters of the Universe Classics toys line.

I'm a little sad that Toy Hunters has the late night time slot... oh well. Normally I'll have to watch it when I get home from work on Mondays. I am wondering if Toy Hunters will succeed. It's got the charm of American Pickers, but a smaller audience. Also the guy already found two holy grail items in the first episode, it's going to be hard to top that wow factor.

What is Action Figure Adventures?

What is Action Figure Adventures all about? Well the name comes from a stop motion animated video project a friend and I worked on in college. It's basically Toy Story with 80's and 90's toys set in a college dorm room. This video project is 8 or 9 years old and has not been "released" yet, because it is still in editing. There are dozens of reasons for the time frame of the project, but I'm hopeful it will eventually be finished.

Action Figure Adventures (AFA) is not the first Stop Motion project that I have been involved with. The same group of people did another series called Animation Creation. I refer to this series as an animated variety show. Basically my buddies and I had made a series of animations for fun that ranged from music videos to random moving objects, to complete stories featuring action figures. We created "episodes" by mixing the different animations together and making little commentary parts at the end to explain how or why the animations were made. Animation Creation was Robot Chicken before Robot Chicken with a little less Twister Toy Theater.

I've always been a huge toy fan and have a large collection of various toys. The bulk of my collection is 3 3/4" GIJoes and Star Wars figures. I have various odds and ends from other toy lines and have recently gotten into the Masters of the Universe Classics (MOTUC) toy line.

My plan for this blog is to write (and maybe video blog) about Toys and other merchandise that ties into them. So, there may be some comic or cartoon material on here. Because of my interest in animation I love cartoons and collect animation cels.  I would also like to post my animations and eventually the Action Figure Adventures show.