I never got around to posting about my final purchase from the New Jersey Collector's Con (NJCC) a few months back. I picked up the Funskool Street Hawk set sealed on card. Street Hawk was a short lived TV show. Kind of like Knight Rider, but with a motorcycle. While Funskool (in India) has a bunch of Hasbro GI Joe molds, they released an unlicensed Street Hawk toy. It's not screen accurate, but it is still pretty close. They repainted the RAM Cycle in black and kitbashed a figure using T.A.R.G.E.T.S.'s head and other figures body parts. 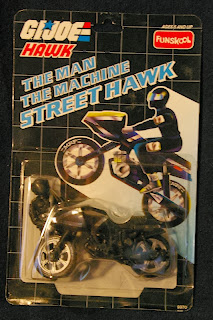 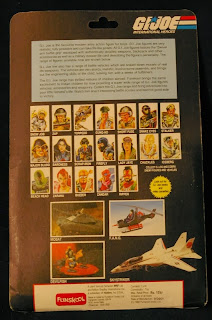 The package is emblazoned with "The Man, The Machine, Street Hawk. The front also features unique card art for the toy. The back of the package has a little bio for GI Joe and shows off card art for other figures and photos of some vehicles from the line. 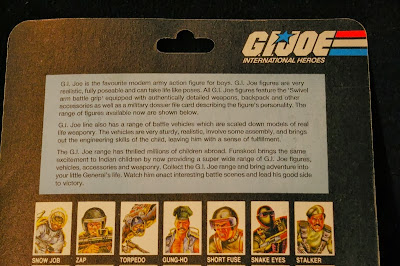