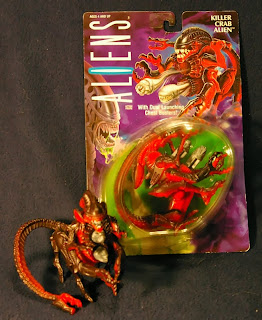 The Killer Crab Alien is one of the many gimmicky Alien action figures pumped out by Kenner in the 90's to cash in on the popularity of the R-Rated Aliens movie. Starting with the first wave of figures and going all the way through, they seem to just randomly pick an animal or insect to mix with a xenomorph to create a new toy.

Over the weekend I went to my local comic stores' celebration of 24 Hour Comic Book Day. I left straight from the Hay Ride and got to the event around 12:20 AM. The owner of the store and one of the employees were starting the first round of competition to be the Mayor of the Comic Shop. I listened to the first trivia question, and then began rummaging throug the $5 action figure bins that were part of the sidewalk sale. I remembered buying a Crab Alien recently at a flea market, but I thought he was missing one of his accessories, so I picked up a sealed toy.

The Killer Crab Alien is crouched close to the ground. He has four legs, two claw arms, and two normal arms. The Crab Alien also has a very long tail that also features a crab claw on the end of it. His torso contains two spring loaded missile launchers that shoot "chest burster missiles"  I wish his tail included an additional point of articulation. His tail is molded in a tight arch which just barley clears his head when moved from one side of his body to the other. 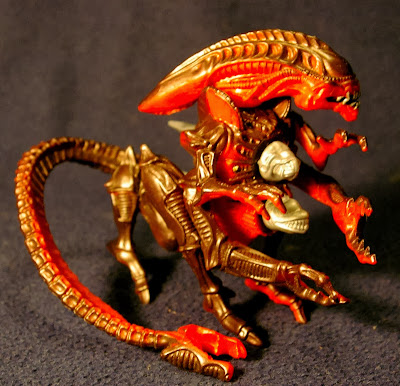 It turns out that the one I had in my collection was complete. Now I'm not sure if I should keep the other one sealed, army build loose Crab Aliens, or part with my duplicate. 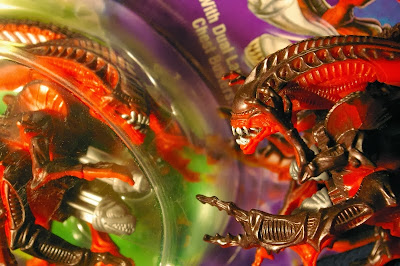 If you haven't visited Cool & Collected lately, go an check out Brian's announcement for his Kickstarter Campaign to his the first issue of the C&C Magazine Published. The layout and photos look great. I can't  wait to read the articles. I miss checking out toy magazines when I stop
by a newsstand or bookstore.
Posted by Buzz Chuck at 6:55 PM