A little while ago my buddy John, from Clawful Punch, told me about a set of Super Deformed Godzilla figures coming to Toys R Us. I kept my eyes peeled, and soon enough I found the set. I'm a huge fan of the Japanese Monster movies. My best friend Derek had a huge collection of monster toys, as well as lot of Super Deformed monster toys when we were kids. So, I was very excited to take a look at these little guys. 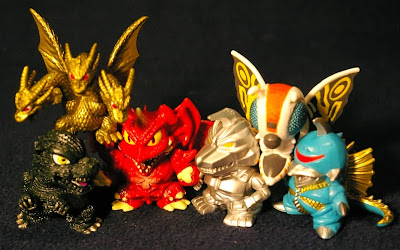 Each one of these little monsters is about two inches tall and made of a hard plastic. They do not feature any articulation, but all have excellent paint apps. The set contains monsters from throughout Godzilla's history. 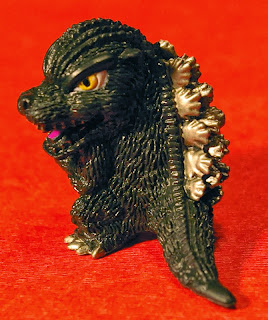 The set odviously includes a Godzilla. This little guy is based on his early 90's appearance. I always felt the 90's Godzilla looked more cat-like that many of the earlier films.

Mothra and King Ghidorah were always two of my favorite supporting monsters. Ghidorah was such a great villain with his three heads that shot lightning from their mouths. I always thought it was a great design for a monster suit. Mothra was my buddy, Derek's favorite. 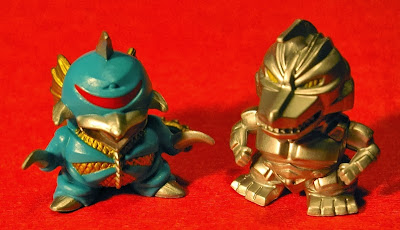 Gigan is the monster in this set based on the oldest movie appearnace. Gigan is decorated in light blue and gold like he looked in the 70's. The set also includes the early 90's version of Mechagodzilla. One of my favorite updates ever given to a Godzilla villian. 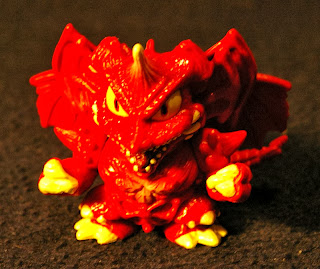 The final monster in the set is Destroya. He was the bad guy in the final film of the second generation of Godzilla movies. After Godzilla vs Destroya came the crappy American Godzilla movie. Then the "Millennium" series of Godzilla films started in Japan.
Posted by Buzz Chuck at 7:19 PM