Several years ago my friends and I ran a website called Obscene Newg and I wrote many toy based articles for that site. Some of that content has actually been re-posted here. This article about the Secret Wars toy line was never posted to that site, although it was written for Newg. Frequently, I'd write articles more often than the other contributors, and my buddy who was the webmaster wouldn't post two of my things back to back. This resulted in several dropped or lost articles. Here's the lost Secret Wars article (it's a little dated now) 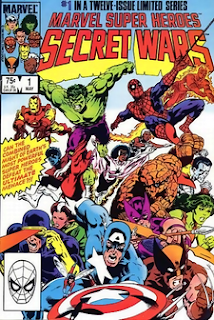 I recently purchased a trade paperback that contained all twelve the issues of the original Marvel Super Heroes Secret Wars. So, between reading that and researching the DC Super Powers toy line for my Superman article I was inspired to write about the Secret Wars comics and toys.

If you have never read the series, or if like myself (until just recently), you have not read Secret Wars since you where a kid. The story is that this cosmic being called the Beyonder constructs a planet called Battleworld by taking chunks of various planets in the galaxy and smashing them together to form a new planet. Then he teleports a bunch of Earth’s mightiest heroes and villains to battle it out on the world he created. Do you see where the name of the planet came from? To make things more interesting he made sure there was plenty of crazy alien technology and fortresses set up on the planet to facilitate the battle. The Beyonder gave the heroes and villains little explanation as to why he brought them to this rocky world but he did issue this brief statement to start the fight.

“I am from beyond! Slay your enemies and all that you desire shall be your! Nothing you dream of is impossible for me to accomplish! 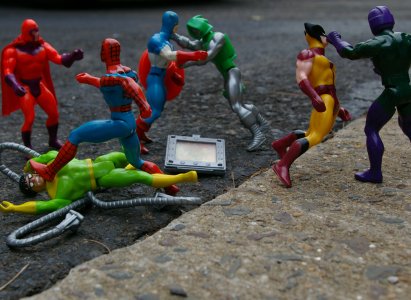 This was Marvel Comics gimmick to fight the Super Power franchise of merchandise put out by their competitor DC Comics. They sold comics (odiously), action figures, coloring books, stickers, and all sorts of other merchandise with the Secret Wars logo on it. The Secret Wars Puff Stickers pictured below were purchased at a store that was liquidating their inventory because they where going out of business years after Marvel stopped putting out Secret Wars Merchandise. 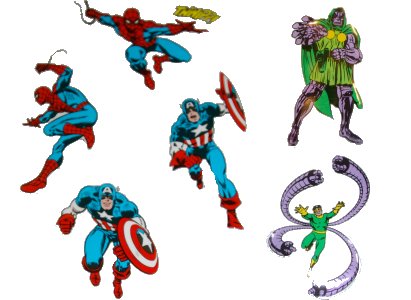 Marvel obviously used this marketing campaign to promote their most popular heroes. Of the characters in the Marvel Universe the following where transported to Battleworld.

Captain America, who served as team leader for the heroes. Three of the four members of the Fantastic Four: Human Torch, Mr. Fantastic, and Thing. Susan Storm was left at home because she was having a baby (Not optimal conditions for a gladiator style fight to the finish) Captain Marvel II, Hawkeye, Hulk, Iron Man II, She-Hulk, Spider-Man, Spider-Woman II, Thor, and The Wasp were all fighting for good.

Doctor Doom was in charge of the bad guys and his army was made up of Absorbing Man, Doctor Octopus, Enchantress, Kang the Conqueror, Klaw, The Lizard, Molecule Man, Titania, Ultron, Volcana, and the Wrecking Crew

Galactus was present, but he was more interested in devouring the planet for energy than fighting the Heroes or Villains.

There were also several mutants present, and they formed a 3rd front in the battle which sided with Captain America. Colossus, Cyclops, Magneto (usually a Villain), Nightcrawler, Professor X, Rouge, Storms, and Wolverine represented the popular X-Men comic series. The Beyonder did several things to help heroes be in prime fighting condition including providing Cyclops with his uniform which he was not wearing when he left Earth, and he restored Professor X’s ability to walk. This gave the X-Men a bit of a dysfunctional nature. Storm the current leader of the X-Men and Cyclops the previous leader where now being bossed around by Professor X whom usually stayed out of battle.

Of the Secret Wars merchandise the Action Figures are probably the most well know. These action figures where the first toy representations of many of the Marvel characters. There were two waves of action figures released in America and then a smaller 3rd wave that was released only to foreign markets. 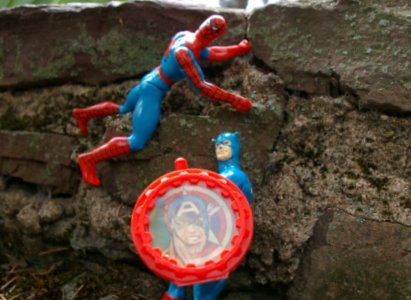 Series One was made up of all characters that appeared in the comics. Many of the figures used the same bodies molds and where made to look like different by have individual head sculpts and unique but minimalistic paint applications. The heroes came with red shields and the villains silver ones. These secret shields had little cards that could be placed inside them to create an image morphing effect.
Even though Magneto helped the heroes in the comic his toy was packaged as a villain with the silver shield. This also helped to give the first series of figures an even numbers of good guys and bad guys. 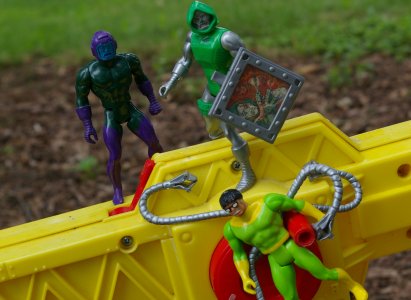 Series Two got off the beaten path a bit with the figures they included. Of the five figures released only one actually appeared in the comics.
Spider-Man’s black costume was probably Secret Wars biggest affect on the mainstream Marvel comic books. Not only was it a striking costume, but it also evolved into one of Spidey’s most popular villains. The Daredevil figure is also interesting because he may be the character that was most overlooked for inclusion in the Secret Wars Mini-Series. I have always thought of him as one of Marvel’s hard hitters yet he was left out. The people in charge of the toy line should have made the Lizard over Hobgoblin if they wanted to make another Spider-Man villain, to keep it more comic book accurate. Like with the male characters, if they had created on female body sculpt they probably could have made most of the female characters with just individual heads. Although the girls were probably left out because most toy companies claim their research says boys don’t want to play with toys of girls. 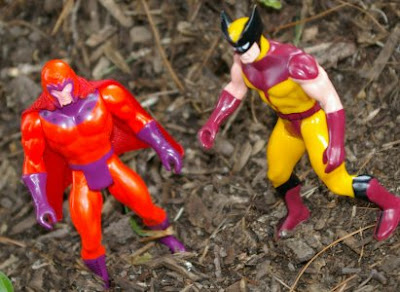 The Third Series that was only released overseas. It contained only three figures and none of them appeared in the comics.
Once again they produced a toy of a Spider-Man villain and it wasn’t the one from the comic book. They also produced an X-Men character while passing up several members of the team which did appear in the comic. I’m kind of glad they did make Iceman, even though he wasn’t in the comic. He’s my favorite X-Men.

I think that Series One figures are probably the most common, but I am making this assumption on the fact that I have all but one of those figures, without even trying to collect the Secret Wars toys. I really should look into getting that Iceman figure.

As mentioned before perhaps the biggest affect the Secret Wars Mini-Series had on the Marvel Universe was the creation of Spider-Man’s Black Costume. After a number of issues and several battles Spiderman’s uniform was looking kind of ratty. Even though it was far from being completely destroyed, showing off his private bits, or revealing his secret identity he decided to mess around with an alien device that produced his new costume. 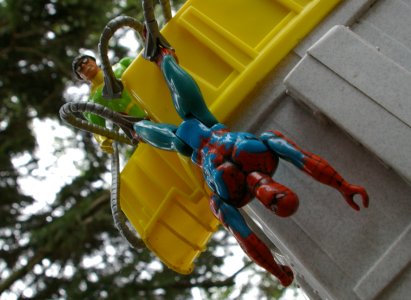 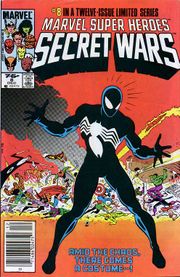 To his surprise the suit produced its own web, giving him an additional super power of sorts. He no longer has to make web cartridges in his spare time and load them into his web shooters during battle. Spider-Man also points out in the Secret Wars comic that he can control the suit with is mind and demonstrates by having it turn into a short sleeve version. It seems out of place and pointless in the Mini-Series because he never uses this for anything useful during the Secret Wars, but it does play a bigger role in later Spider-Man comics.

As a kid I was so impressed. I loved that costume. It always looked so great in the comics. I remember drooling over the Black Spider-Man figure at a toy collector’s shop as a kid wishing it was in my price range. I don’t think I ever saw Series Two in regular toy stores or I probably would have bough the figure. I am looking forward to seeing the Black Costumes appearance in the upcoming Spider-Man 3. Although I don’t think it is nearly as cool without the large white spider logo on the chest.