One year for my cousin's birthday I made him a home made card. At the time he was really into Star Wars. I took a picture of a bunch of action figures and photoshopped him and his siblings into the picture as Jedi. He really liked it, and even returned the favor. He made me a card for my birthday that year using a picture he took of his Obi-Wan and Emperor figures lightsaber fighting on a railing at his house. 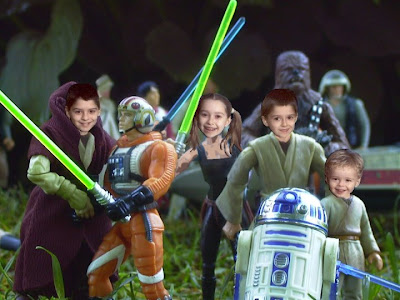 Dominic, who is shaking hands with Luke in his X-Wing outfit, is now out of high school. So, this was a while ago. I'm better at Photoshop now, but I still get a kick out of the pictures.
Posted by Buzz Chuck at 7:52 PM