My house is a real fixer-upper. I have been slowly working on doing a lot of different updates to parts of my house. The toy room at this point really just needs carpet. Unfortunately to save some money I'm waiting until the upstairs is ready for carpet at the same time. I previously showed off some shelves I put in the closet to house the GI Joe playsets. I also finally have some of the shelves I bought from Blockbuster video set up. The toys on these shelves will not necessarily be what is displayed on them with the room is finished. I recently got some vintage Master of the Universe toys and so I decided to throw the new stuff along with what I had before on the shelves so I could enjoy them. 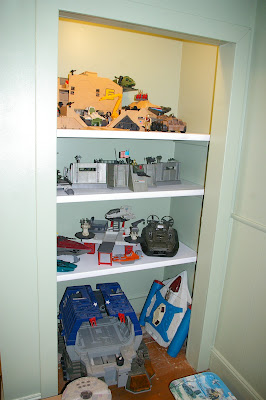 Here you can see the shelves in the closet have been finished off with stripes of wood on the fronts to make them more ridged. They have also been painted white. These displays aren't really final, but I added a few vehicles to the shelves. The Mobile Command Center is on the top shelf. The Triple-T is parked in the service bay and the Mad Dog is next to it. The second shelf down houses the original GI Joe Head Quarters. The third shelf down has the Tactical Battle Platform as well as a bunch of aquatic vehicles. Including the Hydrofoil, Water Moccasin, Devil Fish, and Killer Whale Hovercraft  On the floor is the Gantry/Crawler to the Space Complex. The Defiant Space Shuttle and Booster rocket is still in a closet up stairs. The He-Man Space Ship Eternia is leaning against the wall next to the Space Complex. The Space Ship Eternia is from the early 90's He-Man line often refereed to as the New Adventures of He-Man. 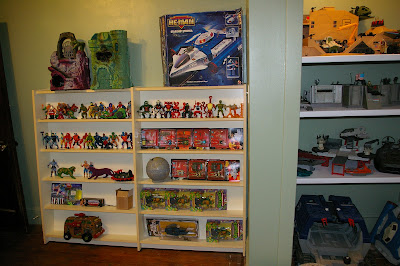 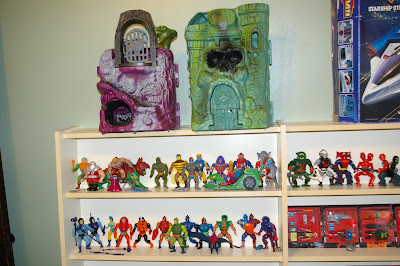 As a kid I had a huge collection of vintage MOTU toys. I eventually sold them off along with my Thundercats to buy more vintage GI Joe and Star Wars toys. Over the years I've occasionally picked up a couple of MOTU figures at yard sales. A few weeks ago a bough a decent lot on ebay. I bough several shelving units from a local Blockbuster when the went out of business. I planned on using them in my toy room. I wasn't sure what would fit exactly when I bought them. It depends some on what other display shelves I build or use in the room. They are decent shelves for figures, but pretty shallow to try to display vehicles on.
Posted by Buzz Chuck at 3:30 PM