During Brian's freshman year at college he was required to tell a story using 12 pictures or less for one of his Electronic Media and Arts courses. He decided to make a brief comic using photographs. Kevin and Derek came to visit Brian that weekend and were features in the comic along with a college friend Jesse. Kevin  plays Captain Nihilism, while Derek and Jesse portray street thugs. Kevin bought his famous Superman t-shirt (as seen in our shows Animation Creation and Action Figure Adventures) at Brian's request inside the mall that the photos were shot around. This graphic was originally posted to our old website, Obscene Newg .com 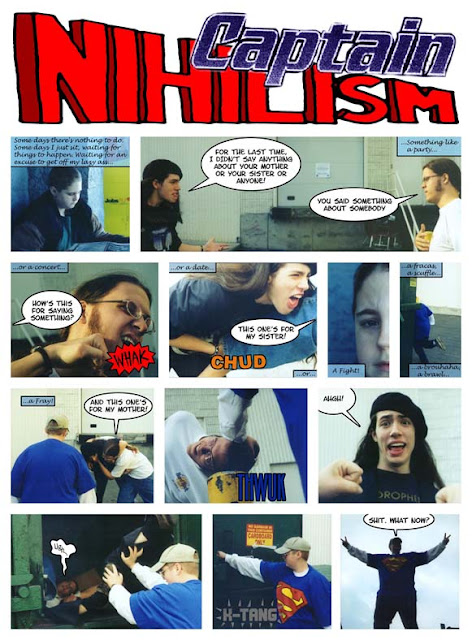 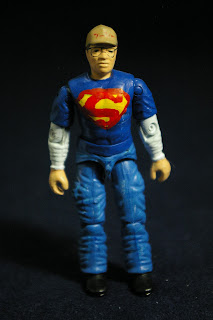 Kevin created a Captain Nihilism custom action figure using parts from several GI Joe action figures. Unfortunately at the time, it was basically impossible to find baseball hats that fit 3 3/4 inch action figures. This forced Kevin to abandon his usual head sculpt for a head that was already wearing a baseball hat.
The action figure head belongs to the African American baseball player GI Joe, Hardball.  The painted flesh tone takes away from the look of the figure. The arms used for this figure had short sleeves and gloves. Some wrinkles were sculpted on the lower part of the arms. The end of the gloves were painted to look like the cuff of the long sleeves. Then flesh tone was painted on the hands.  The figures belt was sanded off and then painted to look like the figures shirt is not tucked into his pants.. Several shades of blue were used to give his pants a nice denim jean look. The Superman Logo was carefully hand painted on the figures chest. 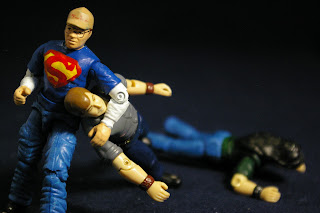 Here's Captain Nihilism beating up some street thungs. It looks like
action figure Derek has had his butt kicked by Captain N. like real Derek. 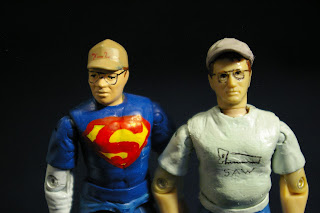 Since Hasbro has released the Rebel Fleet Trooper figure that comes with a cap it
would be possible to redo this figure with a Ripcord head and removable hat.
This would help give all the "Kevin" action figures a more unified look.
Posted by Buzz Chuck at 8:46 PM