Time to take a look at the DC Universe Creeper figure. Of all the DC heroes Batman is my favorite. So when I was buying an entire wave of DCU figures to build the collect and connect Bane, The Creeper was not a horrible forced purchase. I'm not a huge fan of the Creeper, he's one of my least favorite Batman villains. At least I know who he is, and have other characters that interact with him. He's got a strange look and several weird versions of his origins. 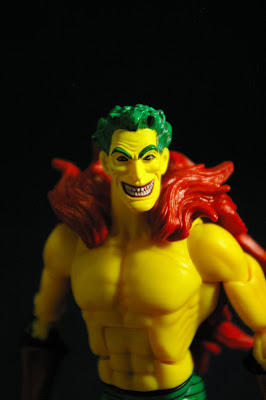 His head sculpt could almost be reused for a Joker figure. The green hair and unusual skin color helps to highlight the similarities. He has a very skinny and lanky build. He also features his signature mane. I don't even know what to call it, a pelt? His hands also look like they are ready to claw someones face off. They have an unusual pose to them. Almost like they are positioned to look like he can climb walls. I don't know if they are new parts of him or reused. 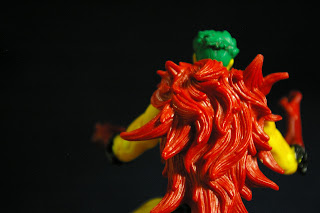 I have no real complaints about the figure, his sculpt and paint are all nicely done. I probably would have skipped him, had he been in any other wave. I don't buy a lot of DCU figures and he's not a top priority character for me. 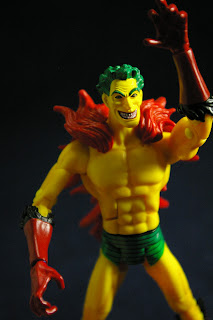