In 80's Burger King ran a Thundercats promotion with their kids meals. There were several Thundercats "prizes" that children could receive. I don't know for sure what all of them were, but there was a ring that features a lenticular sticker, a Snarf straw holder, and a small cup/bank.

As a kid, I used this bank for years. I always kept my allowance and birthday money in it. the cup features Tygra and Cheetara on the outside of a while cup. The red lid features a slit for the money and has the Thundercat cat head logo molded into it. The cup is dated 1986. 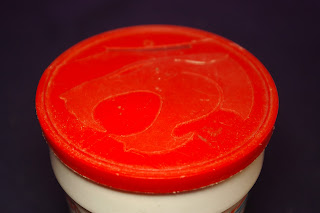 After a quick search I found the commercial for the promotion. Apparently the only prize I didn't get as a kid was a light switch cover plate.
Posted by Buzz Chuck at 9:03 PM