In the 1970's Mego, the company known for making super hero doll/figures, produced a line of action figures based on the television show Buck Rogers. I have had this action figure of the villain Draco for pretty much as long as I can remember.

A neighbor who lived up the street from me passed down old toys a couple of times as he out grew them. One particular box he gave  me contained 3 3/4 inch figures. Mostly GI Joes and a few Star Wars figures. Draco was in that box. He should have a yellow cape to be complete, but I don't think he ever had it while in my possession.. 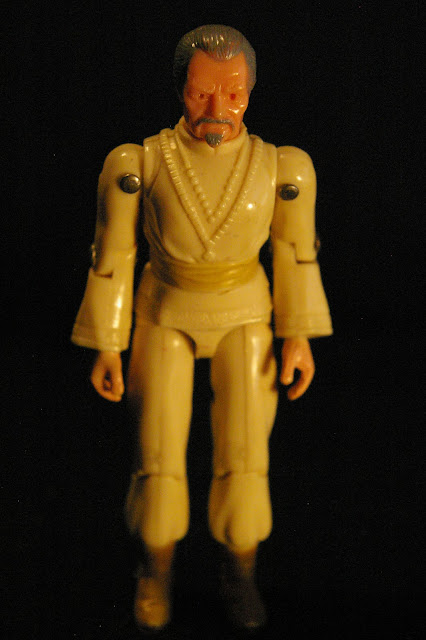 I had no idea who this guy was as a kid. He was very similar to a GI Joe figure, but was clearly not one. He is made of a cheaper feeling plastic than GI Joes and his articulation is slightly different. I didn't know about straight arm GI Joes for a while. I used this figure for various roles in different play scenarios. Sometimes he was a wizard or a ninja and other times he was just and old man. I often times pretended he was blind. He has unusual eyes. They are like blank pin holes.
Posted by Buzz Chuck at 8:14 AM