RoboCop and the Ultra Police was a toy line in the late 80's based on an R rated action film. The toys were pretty well done for the time. By today's standards the sculpt and articulation are weak. The vehicles to this line were pretty nice. They featured a cool blue vac-metal chrome.

The Robo-Cycle was one of two RoboCop vehicles I had as a kid. It is also one of the only 80's toys that I kept in its box for storage when I wasn't playing with it. It features nice box art of RoboCop on the motorcycle with he knees bent, something the toy could not do. 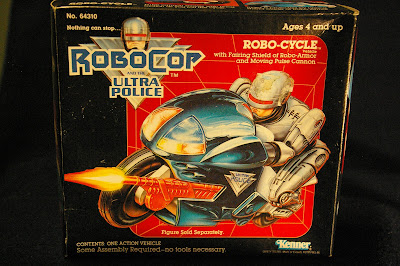 The Robo-Cycle had a cool little action feature where as the bike rolled the little orange gun on the side moved in and out to simulate firing. The vac-metal chrome unfortunately did not hold up over the year. The blue chrome crinkled and is flaking off, sort of ruing the look for the bike.

Here are a few detail shots of the box for the Robo-Cycle. I can't find my Robo-1 police car, but I'm worried that the chrome on it has also crinkled.