I love animation in all it's forms. As you can tell from my other posts, I love stop motion animation. I also love traditional animation. I have a pretty large collection of animation cels and more than half of them are from He-Man and the Masters of the Universe. These two cels come from season 1 episode 46, "Eternal Darkness".

The cloaked character is Dark Dream and his little friend is called Tabor. Dark Dream is more powerful when it is dark so he wants to cause Eternal Darkness by magically causing an eclipse. Tabor is pointing out that Prince Adam is getting away. 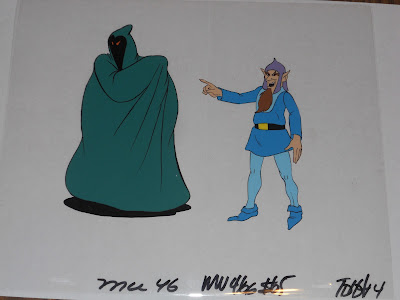 You can see this part of the episode .here. The image is made up of two
different cels which where shots against a background for the the show. 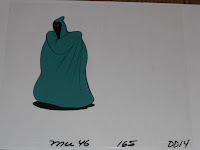 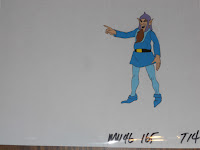 I donated several cels including these two to The Toonseum, a cartoon and comic museum in Pittsburgh, Pennsylvania. They have a gallery named after He-Man producer Lou Scheimer. He is a Pittsburgh native.
Posted by Buzz Chuck at 9:50 PM