In the early 1980's many characters created by the American Greetings Company were sucessfuly markets as cartoons, toys, dolls, books, and greeting cards. A few examples include the Care Bears, Rainbow Brite, and the Get-Along Gang.  My sister and I both liked the Get-Along Gang as kids and we each had a plush doll, some of the poseable figures, and some of the PVC mini figures.

My favorite member of the Gang was Bingo "Be-It-All" Beaver. I had both the plush doll and the poseable figure of him. Each one of the figures from this series came with a piece of cloth clothing. Bingo came with a red long sleeve shirt, which is unlike his usual apearance of just wearing overalls. This probably had something to do with them not wanting to make pants for the toys and having a presculpted torso to use. Many figures has the same arms and torso. 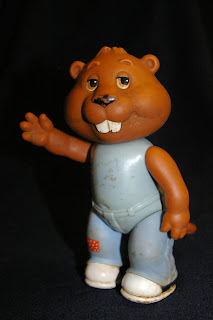 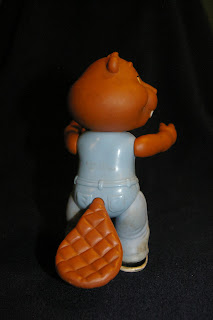 I'm not sure where his shirt is located. It may have been lost years ago, or be mixed in with other toys. His shoes have nice paint apps, and I'm glad they painted the patch on the knee of his over-alls. I always really liked the fact that he had a poseable tail as a kid. I think the fact that many characters had tails is the reason that they had sculpted pants and cloth shirts.