As a kid I wanted Show Time Beetlejuice and Head Spin Beetlejuice so I could make a standard figure. For my birthday I got Head Spin and Shish Kebob Beetlejuice, a little bit of a let down. This figure is based on a quick scene on the table top model after the "Ghost with the Most" was released from his crypt. He wears a long coat and at one point makes spikes come out of his body. The toy is a little more colorful than the on screen costume. To make the toy a little more friendly each skewer has a little food item or something gross impaled on it. If you don't have the spikes going through him he has a ten holes in his torso. 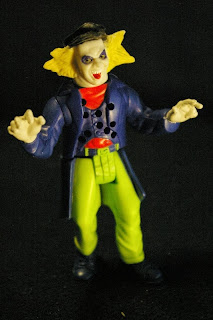 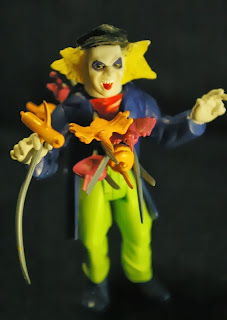 Like the rest of the Kenner Beetlejuice figures, Shish Kebob Beetlejuice's head comes off revealing a smaller head. His small head is a little eyeball with a bushy eyebrow for hair.  I don't think this feature references any scenes from the film. 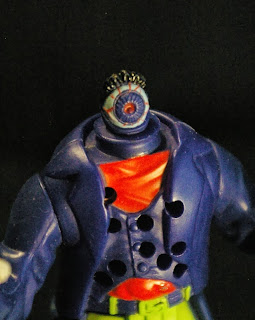 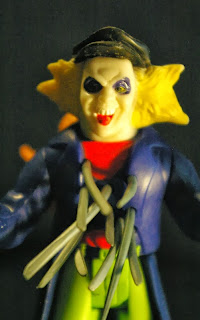 As a kid I used to like putting all the skewers through Beetlejuice in the same direction so you couldn't see the little food items making it look like he just had the spikes sticking out of him. I also liked to stick him in my Ghostbusters Ecto-1 and pretend he was a ghostly cab driver.