Since sometime in the first grade I have been best friends with a kid named Derek Moench. He has had a huge influence on me and my toy/animating hobby. For years Derek and I have made "Set Ups" with our toys and photographed them. We used to do a Set Up every year on New Years Day. Over the years the quality of these displays have improved. This photo is from one of the last New Years Sleep Over Set Ups we ever did. By the time we got into middle school and high school we started shifting to making stop motion animated videos which turned into our shows Animation Creation and Action Figure Adventures (check out the tabs to the right ----->). 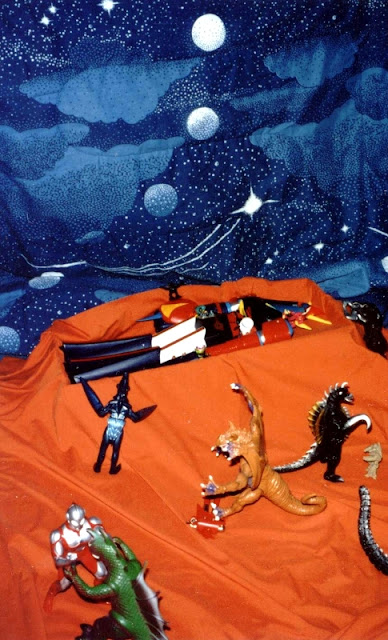 We really managed to really fill the frame of this photo. In many of the photos from our early set up you could see the carpet or the furniture in the back ground. Our final Set Up took place on Mars. We used an orange sheet for the surface of the planet and Derek's star field comforter as the sky. As you can see the aliens have not yet activated their giant defense robot, but the monsters are battling it out.

One of my favorite things about this photo is that it features lots of Godzilla (and other Japanese monsters) along with Raydeen from Shogun Warriors. In the 70's Derek's Dad, Doug Moench wrote both of these comic books. No wonder Derek had tons of these toys when we were kids. Someday I'd actually like to photograph Derek's Monster collection to share with you guys. I probably own 15  Japanese monster figures. Derek as at least 100. You can see a lot of them in our video Godzilla Flick on youtube.
Posted by Buzz Chuck at 9:30 PM