A batch of custom GI Joes

I have posted a lot of toys on this blog so far, but I haven't really touched my vintage GI Joe and Star Wars collections yet. This is mostly due to the fact that they were the most well packaged toys when I moved into my house, and they are still pretty much packed up. They have been painfully waiting for the completion of my Toy Room so they can properly be displayed. So far almost all my GI Joe posts have been about figures used in our animated shows (Animation Creation and Action Figure Adventures) or custom Joes. I really enjoy making custom figures, and although I don't do it as much any morel it is a hobby that has been a lot of fun.

So, today's post shows off some more custom GI Joes. 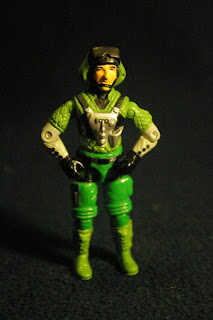 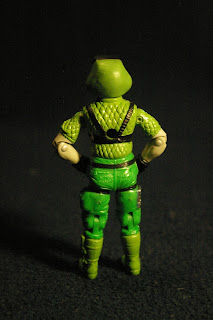 Will Riskit - This is a generic "green shirt" pilot that I made years ago while sifting through my parts box.  There are plenty of GI Joe vehicles with Co-Pilot or Gunner seats, so I figured I would make a character to fill this role. My Dad game me the name. There is a helicopter pilot at his work that they call Will Riskit because even in a tight situation he'll risk it! Will is made up of a Lift-Ticket head, Psych-Out upper body, and Blaster (of Battle Force 2000) legs. 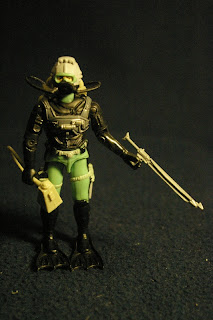 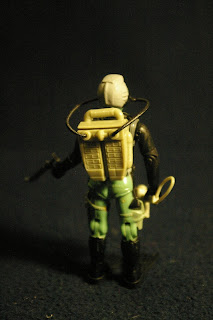 Night Force Wet Suit - I was trying to create a new diver out of a broken Wet-Suit, but I just felt like he wasn't different enough. The muted paint scheme works well for Night Force though. He uses the head and lower body of Wet-Suit. His arms come from a Python Patrol Trooper, and his torso is a repainted Slip-Steam piece. His equipment comes from the 2000 era diver two pack with Wet-Down. 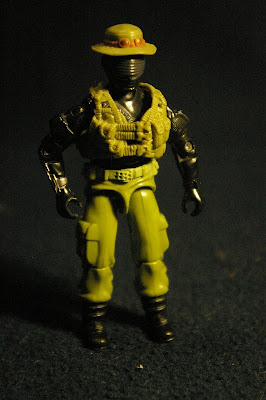 Jungle Mission Snake-Eyes - When ever I can get parts to cool (and hard to find) characters at yard sales I always pick them up. Then I try to make something useful out of them. This started because when I was a kid I would sometimes buy a broken figure of a character I really wanted and then cobble together a place holder version of this figure. This Snake-Eyes v2 head, torso, and arms were not even all bought at once, but were slowly assembled as a place holder figure. He originally had black mail-away Sgt Slaughter legs, but once I got an actual v2 Snake-Eyes I reworked him. For special jungle missions Snake-Eyes has Bazooka legs with repainted boots and Crosshair (2000's) vest and hat. The webbing and hat are sort of homages to his Vietnam gear. His one thumb was broken off when I bought his parts. A little bit of hot glue built up on the stump and painted black allow him to hold weapons. 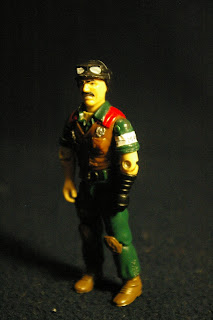 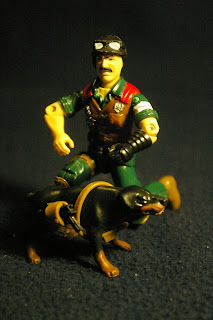 Mutt & Junkyard (Improved) - This is just a slightly improved paint job really. When I get an extra copy of a figure I sometimes like to tune up the paint job a little. Paint details that Hasbro skipped or add something of my own. I have painted the lenses  on Mutt's goggles, his badge on his chest, and added a white arm band. The arm band says "MP" on it to match Law & Order better (although it doesn't really show up in the photo). Junkyard has a custom paint job to help him match his cartoon appearance more closely. He has more brown on his feet, belly, and face. He also has extra painted details like eyes and teeth. He also wears a spare Chuckles holster. This dog is packin' heat. I don't know how practical that would be, but I could see a cool story line where Mutt gets pinned down and Junkyard brings him a weapon. 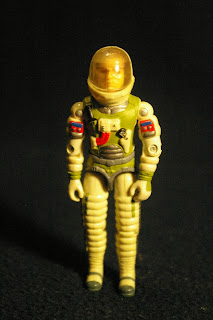 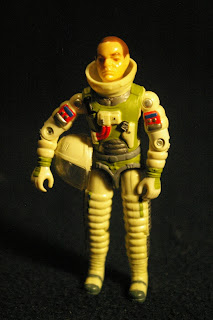 Astronaut Grand Slam - A long time ago I was working on a story outline for a GI Joe web comic or stop motion animation that would tell a new story of GI Joe. This all new telling of the GI Joe story would be dictated by the action figures. I was going to slowly introduce characters in release date order, but also slowly kill off or retire characters who never got new figures in the original line. I wanted there to be a reason for the Joe team to get a new flamethrower expert or jet pack trooper (I wasn't going to kill everyone, but have the roster change) Grand Slam was going to go on a secret mission in space (before the Joes has their own Shuttle) to stop a Cobra plot, but die in the Challenger tragedy His figure is made of an Ace body with a Grand Slam head. There are some added paint details to make him more interesting..