Magneto is without a doubt the X-Men's biggest bad guy. His character is so complex that he could almost be the hero. If his methods were different he could totally be the good guy, and he thinks he is. Magneto has different goals from Professor X, but they aren't really bad goals if you are a mutant.

This Magneto figure, from the first wave of X-Men figures by ToyBiz, and was my first X-Bad Guy. He's a nice looking figure with decent articulation. He has 9 points of articulation which is pretty good for a toy from the 1990's. They are at the neck, shoulders, elbows, hips, and knees. Other than his head he is molded out of red plastic with clean purple paint apps on his boot, gloves, shorts, and collar. 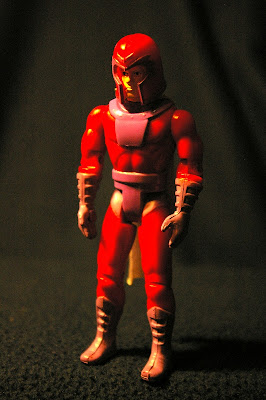 Magneto comes with a removable helmet, cape, and three magnetic pieces of junk. The helmet is a little bulky, but fits pretty well. His purple cape clips on his neck like the 80's Super Powers capes. I always wished it was larger. The cape is so small it is almost completely hidden from view by his torso. Magneto has three magnets imbedded inside him. One in the torso and one in each hand. This allows light weight metal objects to stick to the figure. He came with three pieces of junk that have small metal plates glued into them.  It's kind of a shame that the magnets make his hands unable to grip accessories, but it's a fun gimmick for kids. 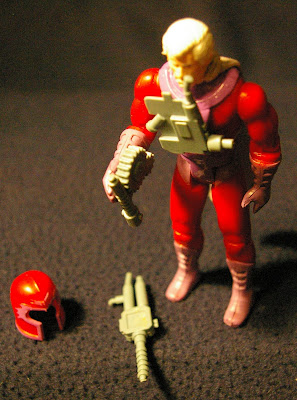 When I was picking out villains for the stop motion animated show my friends and I made in college, Action Figure Adventures, Magneto was immediately included. He didn't really get as big of a role in the show as I originally though, but none of the villains really did. The show mainly focused on the good guys. My buddy Derek, who wrote the scripts for the episodes isn't a huge X-Men fan and I also think that had something to do with why Wolverine, Gambit, and Magneto didn't get used much. The following link takes you to my favorite Magneto scene from AFA Episode 4. 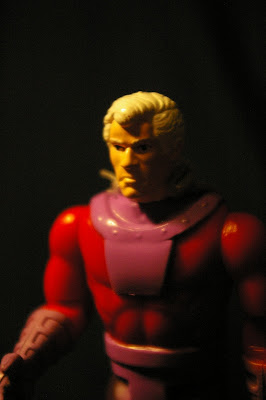 What a great head sculpt!