Definitely Dinosaurs was a line of Caveman and Dino toys made by Playskool in the late 80's and early 90's. The dinosaurs in this line all had a slightly animated appearance that appealed to kids. Cera the Protoceratops from the line is painted in various shades of green with spots on its head frill. This dinosaur came with a Caveman named Zindar. I used to buy these dinosuars at yard sales for my Dinotopia display when I was in late Elementary school. The Protoceratops has swivel cuts at the top of each of its four legs. The top portion of the head is articulated at the jaw. 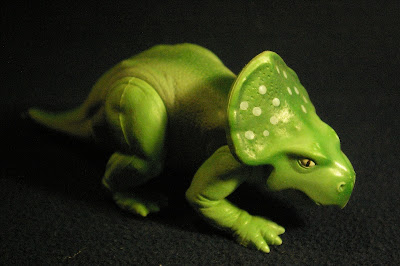 All the Definitely Dinosaurs carry a logo on their belly or leg that makes them easy to identify as part of the line. I always wondered if this line inspired the JP logo on the Jurassic Park toys. 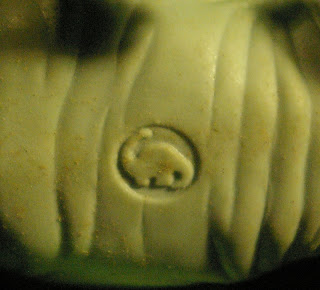