I have been recently buying and making costume figures using the Rose Art Color Blanks. A while back I made a couple of Masters of the Universe themed figures. I kind of got started on these guys after Pixel Dan posted about Color Blanks during his Advent Calendar. I sent him pictures of my Spikor and Man-E-Faces. Both of them were done using marker on the plastic figures. I decided to sculpt and paint a custom Mosquitor for Dan as a birthday present. 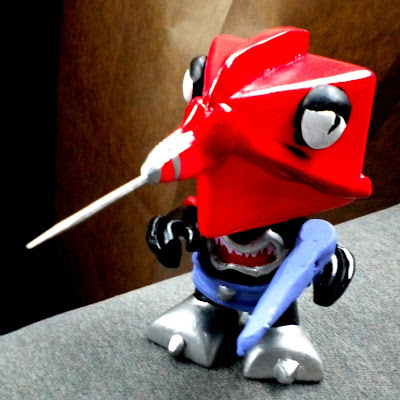 I forgot to photograph him as normal, so this photo was taken in the parking lot of the post office. He's made using the triangle headed Color Blank. I sculpted on details like his eyes, nose, and belt. I sculpted him a little gun and the tip of his nose is a tooth pick. Dan shows him off in the video below.